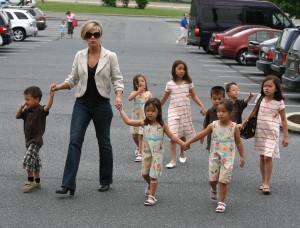 Families used to come in two sizes: big and bigger. But in recent times the number children many families choose to have has dropped to only one or two. Yet, with the media obsession over larger than life families, could the number of kids more parents want climb back up?

You see them every where. The families with enough kids to make half a baseball team, or even the full team. Celebrities, such as Brad and Angelina, make having six kids seem fun and cozy. And television shows like Kate Plus 8, 19 Kids and Counting and 9 By Design give us weekly glimpses into the lives of families who choose to have more than the average two kids. If popular culture plays on popular views, the big family may be coming back into fashion.

According to Susan W. Hinze, professor of sociology and women’s and gender studies at Case Western Reserve University in Ohio, until the recent recession happened the birth rates for American women were increasing. In 2006, the birth rate hit its highest since the baby boom of 1961. Though the average is still roughly around 2 children per household, many affluent families are choosing to keep growing to three, four, or more children. 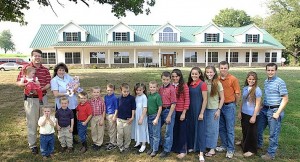 The cost of caring for children has grown significantly since the 1960s. In 1960 it cost a middle class family $25,000 to raise one child. In 2009 that number was estimated to be closer to $222,000. It stands to reason that families with more money to spend could afford to have more children in their care. However, like many other trends, what the rich and famous do can have a ripple effect on lower socio-economic families.

David Hacker, a demographic historian at State University of New York at Binghamton, says families used to have many children because the childhood death rates were so high. A family could have eight children, but only raise three or four to adulthood. For many families, children were also additional means of income as workers on family farms and later in child labor industries.

Families today view children very differently, and their worth is very different. Rather than being an extra set of hands on the farm, a child can cost a woman up to $1 million in lifetime earnings. Children are viewed as a source of joy or happiness, and as an emotional value to the parents. So when parents see happy families with many children, they may feel tempted to add to their own broods as well.

“The rich are trendsetters,” says Hacker. “It may bear watching whether these well-publicized larger families will lead to overall increases in fertility.”

Though it is still too early to know for certain if the next trend will be for big families, there have already been many mothers making the decision to go past the average two. – Summer, staff writer