Home » Are Our Mobile Devices Effecting The Relationships We Have With Our Kids?

Let’s admit it, we carry our phones, and sometimes even our tablets everywhere with us. They’re a huge convenience to us, we are able to stay connected to our friends and family members via social media, everywhere we go, we can surf the internet right from our phones, and carry an entire library’s worth of books in our purse. Technology is certainly a beautiful thing, and there is no doubting that it has made our lives easier. But are we spending too much time on our mobile devices?

A new study released today in Pediatrics gives us a better idea of what kind of impact our mobile devices have on our closest relationships, especially the ones with our children. Researchers examined patterns of the use of mobile devices during meals in fast food restaurants. The study was designed by researchers from the Boston University Medical Center in order to generate a scientific hypotheses about mobile device use and the effects it has on caregiver-child relationships. As of right now, there has not been much research done on this topic. 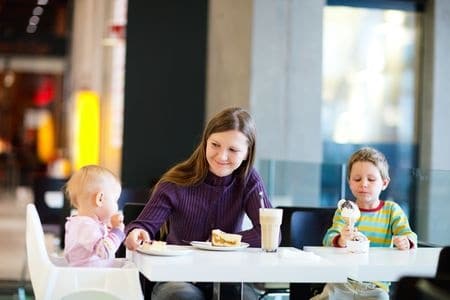 The team anonymously took to fast food restaurants to covertly observe a total of 55 interactions in a total of 15 neighborhoods within the Boston area. The majority of the groups they observed had between 1 and 3 children, of which most appeared to be school-age. The meal observation would last between 10 to 40 minutes. Over the course of the meal, the researchers would take detailed notes on the duration and frequency of use of a mobile device. They also monitored how many times the children would call for attention and how many times the caregiver would respond to the children. 15 of the 55 groups that were observed did not use any device during their mealtime, while the rest of the 40 groups’ usage ranged anywhere from brief interactions with their device to nearly continuous use throughout the entire meal, even eating and talking while staring at their device. Others would put the device down briefly to engage in other activities.

But how did the children respond to their caregivers behavior? Some of the children were already engaged in conversation or activities with another child, or playing with a toy. Their behavior did not appear to be changed by their caregivers’ device usage, especially if the usage of the device was brief. However, when the caregivers were continuously absorbed in their device, some of the children did not bother to try and get the adult’s attention, while others began to show limit-testing and provocative behaviors, at which point the caregivers would use a scolding tone of voice with the child or seemed to be insensitive to the child’s needs. Some even used physical responses, like one caregiver even kicking the child under the table, and another repeatedly pushing the child’s hand away from their face when the child tried to lift their face away from the device. While most of the time these caregivers were physically near their children, they could not have been further apart, emotionally.

It is clear that the impact of our mobile device use is effecting the relationships we keep, especially familial relationships. Overuse of mobile devices are sending a very grim message to children; that they are not worth their parent’s time, love or effort.

Jenny Radesky, lead author of the study acknowledges that this topic is something that is “very complicated” to study, and that the research project is limited. Her intent in writing the study was to raise questions, rather than finding answers. Her goal was to “break the ice” on the subject and start the walk down the long road of fully researching this increasingly growing problem that affects more and more families every day.