Home » Argentine ‘Miracle’ Baby Takes A Turn For The Worse 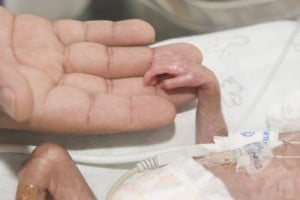 When Luz Milagros was delivered 13 days ago, doctors made no attempt to resuscitate her, but instead told her parents she was stillborn and handed them a death certificate.

By some amazing miracle she survived in a refrigerated box for 12 hours, but now the tiny fighter has taken a turn for the worse.

“She’s an extremely premature baby, 13 days old and weighing 708 grams (1 pound, 5 ounces). She’s in a critical state, quite a bit worse than yesterday and at risk of dying,” said Diana Vesco, the head of infant care at the Perrando Hospital, where the baby was born.

“Yesterday she had an episode with a hemorrhage in the lungs, which required us to increase artificial respiration. Her heart and breathing stopped. She required advanced CPR,” Vesco told Reuters.

“We believe that if our daughter has gotten this far, despite everything, it’s because she’s here to stay,”

It is not uncommon for a baby born at 26 weeks to have episodes where they stop breathing.  She is a very fragile micro-preemie who will not be stable for probably 8 more weeks.  What we hope, however, is that her fighting spirit is able to get her through this tough time.  The good news is that the statistics are on her side.  Girls have a higher survival rate and many babies, who were born much, much smaller have survived and gone on to thrive.

Miracles happen everyday and we hope God has set another one aside for this baby.