Home » Ashton Kutcher Opens Up About Fatherhood To Ellen DeGeneres

New dad Ashton Kutcher sat down with Ellen Degeneres this week to chat about the last season of his show Two and a Half Men. As expected, the conversation moved to his new baby, and the actor opened up about being a dad, how fiance Mila Kunis is doing in her new role as mom, and why they have chosen to not have a nanny. 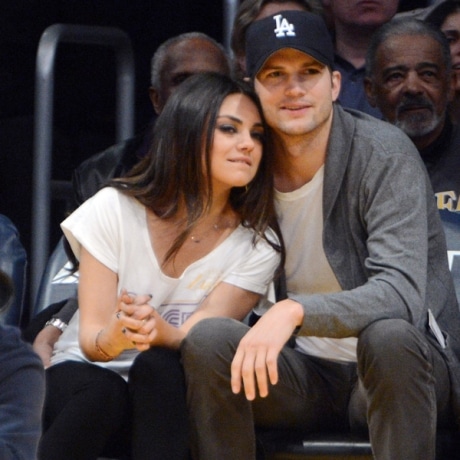 In October Ashton and Mila welcomed a baby girl, Wyatt Isabelle Kutcher. Being a dad, he says, has been very different from what he thought it was going to be.

“When you first get them, you’re all excited and you’re ready to do all these things. And you have all these dreams,” the actor excitedly told Ellen. “But then you realize it’s like getting a new cell phone where all the features don’t work yet,” he says with a smile. “It’s like a phone that won’t take pictures, and you’re like, ‘Why won’t my phone take pictures?’ And it won’t make calls and it doesn’t do a lot, but it looks really cute.”

No, she doesn’t throw the football around but she learned a couple new skills that are pretty cute…

“She found herself in the mirror and realized she was able to control the thing in the mirror, which was pretty cool.”

But the best part of having a baby, he told Ellen, is watching Mila become a great mom.

“She’s the greatest mom. I go to work every day, and I come home and she’s perfect. And it just seems like everything went amazing. And I know that something probably didn’t go amazing, but she never complains … it’s unbelievable. She’s incredible.”

No nannies here!  Ashton also revealed that he and Mila want to be the only ones raising their baby because they want to have a strong connection with her.

“We just want to know our kid. We want to be the people that know what to do when the baby’s crying to make the baby not cry anymore. We want to know, like, when she makes a little face or something, we want to be emotionally in touch with her. And I think the only way to do that is by being the one who’s there.”

His biggest surprise so far?

Adding, “There’s a great quote by Carlos Slim, and he said, ‘Most people think they need to make a better world for their children, but the reality is we need to make better children for our world.’ And I try to live by that. And I think I really look at this as the greatest opportunity of my life.”

Concerned about the baby being photographed, Ellen gifted Ashton with a custom Mima Xari with drop down ‘paparazzi shield’. 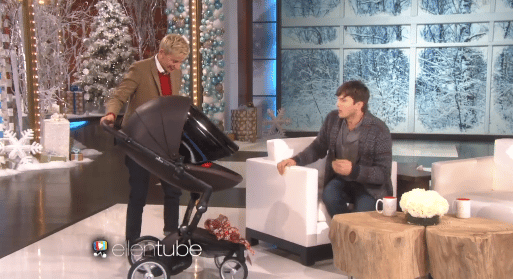