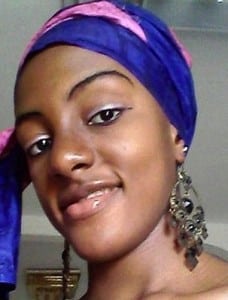 The staff of South African Airways could not guess that one of the passengers boarding their flight was pregnant because of her baggy clothes. But the baby could not remain a secret for long as he came into the world right inside the airplane mid-air!

17 year old Fatoumatta Kaba went into labour as she was flying from Johannesburg to New York and in just two pushes delivered her son Mamel Joella. What came as a blessing was the presence of a doctor on board.

The staff of the South African Airways says they did not even realise that Kaba was pregnant because of her baggy clothes. They said that the airline’s policy bans pregnant woman from flying internationally after 35 weeks.

‘(Ms Kaba) was dressed in such a manner that on plain view there was no way you could have detected that she was pregnant,’ spokesman Tlali Tlali told MailOnline

Kaba went into labour, four hours after takeoff. The staff asked if a doctor was onboard. Thankfully one of the co-passengers was Dr. Julie Williamson who was on her way back from a conference in South Africa.  She is a pediatric anesthesiologist from California and was accompanied by Dr Steve Paridon.

Dr. Williamson recalls that while all other passengers panicked, the young mom remained calm and delivered the baby in just two pushes. Even for her it was a nerve racking moment, as she did not deliver a child since she was in medical school 15 years ago.

She said, “There was a lot of discussion whether to divert the flight, she made the decision for us by saying, ”Push!” And when we checked, the baby was crowning, and she delivered him in two pushes.” 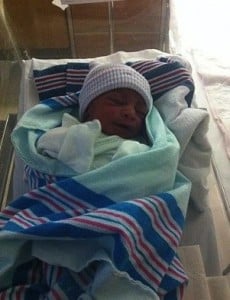 As soon as baby Mamel Joella  was born he was wrapped in blankets and rocked by airline crew as they walked up and down the aisles .

They had considered diverting the flight, but when the staff noted that Kaba was comfortable after the delivery, the plane flew to its pre-destined city of New York.

At JFK, Kaba’s sister in law was waiting to greet them. The mom and child were taken to Jamaica Medical Center in Queens to be checked over.

The airline was happy to note that the delivery went well for Kaba but still advise others to inform the staff if they are in the later stages of pregnancy.

‘There is no way that we could identify passengers we believe could be pregnant. Screening them would amount to harassment,’ Tlali said. ‘No airline in the world would do that. If someone is pregnant they are required to be checked by a medical practitioner of their choice and show us proof that the doctor has given them approval to fly.’

Ms. Kaba and her newborn baby are doing well at the hospital. The 17 year old is still unconcerned by her mid-air drama.

‘I wasn’t scared to have the baby, I was very happy. I feel better now after delivering the baby. Everything’s OK.’

Kaba is wife to 38 year old Gambian diplomat Abubakary Jawara. She plans to stay in the US for a few days with her family, before bringing the baby boy back to South Africa.

She also says that she never thought she would become such a centre of attention.

‘I just expected to come here and be happy and visit my family and then go back to my husband,’ she said.

Baby Mamel will not be an American citizen because the flight was not in U.S. airspace when his mother gave birth. But he will surely always call America his second home.