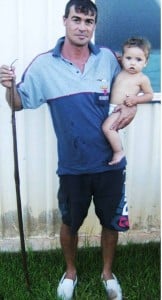 South-western Queensland residents have finally been able to return to their homes after some massive flooding in the area, but they have some unexpected visitors…mulga snakes.

Mulga snakes are one of the four largest venomous snakes in the world and the second largest in Australia. After the flood, they moved to higher ground. Unfortunately, that higher ground is occupied by humans.

Madeline McKellar and her 11-month-old son Charles had the unfortunate experience of being one of those humans to meet a mulga snake who was “just trying to keep dry too.”

Madeline and Charles were visiting a local friend. They were gathered in the living room when a 1.5m mulga snake started chasing her son. Luckily, a friend snatched little Charles up, just before he was bitten, but the experience could have turned ugly.

While the mulga snake’s venom strength is rather weak, compared to other venomous snakes, the mulga can deliver ten times as much venom in one bite as the average tiger snake, which can make for one powerful bite, especially for children.

“I’ve never seen a snake inside the house since I’ve lived here,” Madeline stated, after the incident was over. “It obviously crawled up from the flooded Warrego River and came into the house.”

Charleville Amalgamated Pest Control owner, Bruce Osborne, says that, while he has been out removing snakes from residences in the area, mulga snakes are just one of the threats to area residents since the flood.

“Our biggest problem out here is going to be sandflies,” stated Osborne. “The water is still pretty high out here, but as soon as it lowers they’re going to hatch from the soil.”

Sandflies sound harmless, but they, like mosquitos, can carry many dangerous human diseases, including kala-azar fever, oriental sore and sand-fly fever. While not usually fatal, these diseases can leave permanent scars and can cause serious illness. If fatality occurs, it is generally a symptom of the illness itself.

Brisbane City Council fogging trucks are planning to do a tour of the towns to help exterminate the pests, but Osborne says that the problem is going to be too big for just two trucks alone.

“It’s getting to the point where you can’t walk with your mouth open,” he said. “[Murweh Shire] Council have called me to do remedial stuff, but when the water lowers, the job will be too big for me alone.”