Home » Babies Left to “Cry it Out” Feel the Stress, Even after the Crying Stops 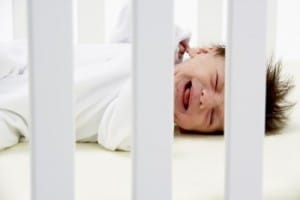 We parents get a lot of advice from a lot of places. We’re told that we shouldn’t hold our babies too much, lest we might spoil them. We’re told our infants should be placed on a feeding and sleeping schedule, and that any cries during sleeping time should be ignored; the baby will learn to soothe itself. That may seem true, considering the fact that the baby does, eventually, stop crying, it may be doing infants more harm than good.

Experts are pretty split on the issue. Sticklers for the “cry it out” method like childcare guru Gina Ford, who say that babies should learn how to operate on a schedule and that the infant will learn how to soothe naturally. And parents are likely to experience some benefits, such as not having to put their infant to sleep each night. Yet, on the other end of the spectrum, you have some pretty passionate critics like childcare expert Sheila Kitzinger, who says that parents should be guided by instinct rather than prescriptive routines or the latest fad. So who’s really right?

“Although the infants exhibited no behavioral cue that they were experiencing distress at the transition to sleep, they continued to experience high levels of physiological distress, as reflected in their cortisol scores,” said Wendy Middlemiss, a researcher at the Unmiversity of North Texas.

According to a recent study, stress hormone cortisol levels remained high in “cry it out” babies, even days after they had learned to “soothe themselves.” What does that mean to parents? Essentially, it means that the baby is still upset; they’ve just learned to keep quiet about it.

In the study, researchers followed the hormone levels of both infants and their mothers while implementing the “cry it out” technique. All of the infants involved in the study were aged between 4 months and 10 months. Many of them had difficultly falling asleep without being comforted or struggled to fall into a sleeping routine.

At the designated sleep times, infants were put to bed and left to soothe themselves to sleep. Researchers logged the length of time the infant cried. In the next room, the mother sat and listened to their children cry, but they were not allowed to go in the room and comfort the child.

“Overall, outward displays of internal stress were extinguished by sleep training,” said Middlemiss. “However, given the continued presence of distress, infants were not learning how to internally manage their experiences of stress and discomfort.”

Siobhan Freegard of the British parenting advice website Netmums had this to say about the study results:

“I don’t think anybody would ever say that you shouldn’t use controlled crying – it is about getting the balance right. If you are on maternity leave with your first child and can have a nice lie-in and breastfeed the baby in bed, that is very different to being a single mum who needs to go out to work or no one will eat. I have been advised many times to try controlled crying, but it caused me more stress than picking up the baby and doing what comes naturally. But I know other mums who have found controlled crying short, sharp and successful.”

The study does not indicate whether or not the infants’ cortisol levels drop off eventually, and they are now planning to do a larger study to determine if infants do eventually learn how to cope with going to sleep alone.

I disagree, completely, with something that Freegard stated. I believe that there are people who will and do say that you should never leave a baby to cry it out. This study may have provided more scientific evidence to back it up, but the fact that leaving an infant to “cry it out” causes undue stress to both the infant and mother is far from new. Generally speaking, mothers have heightened instincts about many things. When your instinct tells you that it’s best to pick the baby up, your instinct is probably right.

I fully understand the need for sleep, but there are ways to make that happen without causing stress for you or your baby. Take the time to learn the 5 S’s; they are practically invaluable. Learn techniques that will help your baby become tired.

A few examples: create a bedtime routine early, eliminate loud noises before bedtime, keep the lights dim at bedtime and start the routine the same time each and every night. These are natural ways to help your baby follow a sleep schedule without having to cause stress to you or your little one. It might take a little longer to show results, but at least your baby will know that you are always there when they need you.