Home » Babies May be Able to Recognize their Native Tongue at Birth, Study Says 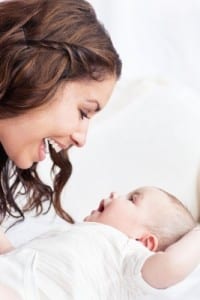 Current research supports the idea that infants learn language after they are born. However, a recent study form the University of Washington, as well as a couple of other studies, has recently led scientists to believe that language development actually starts while still in the womb.

“The mother has first dibs on influencing the child’s brain,” Patricia Kuhl, of the University of Washington told Fox News. “The vowel sounds in her speechg are the loudest units and the fetus locks onto them.”

In the University of Washington study, researchers examined 40 babies (an even mix of boys and girls) in the Tacoma, Washington area and in the Stockholm, Sweden area. When the infants reached about 30 hours old, researchers had them listen to vowel sounds in both foreign languages and their native language. Interest in the sounds was determined by measuring how long the baby sucked on a pacifier.

In both countries, researchers found that the babies sucked on pacifiers longer when listening to vowel sounds not in their native tongue. This led researchers to believe that the infants were able to differentiate between the two languages.

Christine Moon, a professor of psychology at Pacific Lutheran University in Tacoma and lead author on the study says that the study’s data indicates that fetuses can and do learn about the speech sounds of their mother while in utero.

“This study moves the measureable result of experience with speech sounds from six months of age to before birth,” Moon told Fox News.

This study isn’t the first to indicate that sound recognition begins while still in the womb. A 2011 study printed in the journal PLos One, a group of pregnant women were asked to play a brief recording of a descending piano melody during the last three weeks of gestation. A month after birth, the sounds were played for the babies again. Researchers also played unfamiliar melodies for the infants. In the end, researchers found that, compared to their heart rates when listening to an unfamiliar melody, the infants’ heart rates slowed significantly while listening to the familiar melody they’d heard prior to birth.

Another study, published in 2009 in the journal Current Biology, scientists recorded the cries of 60 healthy newborns between three and five days of age. Of those infants, 30 were born to French families and 30 were born to German families. Upon analysis, researchers found distinctive differences in the melody of cry in German infants when compared to the melodies of French infants.

All of these studies, including the most recent one, which will be published in the journal Acta Paediatrica, may help to reveal more ways that newborns and fetuses soak up information.

“We want to know what magic they put to work in early childhood that adults cannot,” Kuhl said. “We can’t waste that early curiosity.”