Home » Babies With Big Heads May Be Smarter

The University of Southamptom in England report says a child’s intelligence may partly be reflected by how much his or her head grows by age 1. 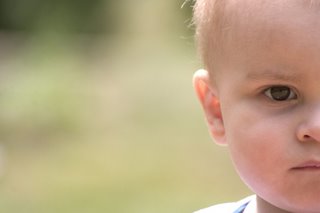 The study, led by Catherine Gale, PhD, looked at 633 full-term British babies and found that head growth, especially during infancy, may be a key factor in a child’s intelligence– along with other factors such as parent-child relationships.

“The brain volume a child achieves by the age of 1 year helps determine later intelligence,” Gale and colleagues write in the October edition of Pediatrics.

The researchers do not know exactly what causes some babies to have bigger brains than others.

The researchers used a tape measure to gauge the babies’ head circumference at birth, one year, four years, and eight years.

The children took IQ tests when they were 4 years old and 8 years old. Those with the biggest heads tended to have the highest IQ scores.

The researchers found that head growth by age 1 was the key factor. Catch-up growth didn’t matter as much.

“Brain growth after infancy, at least in terms of brain volume, is unlikely to compensate for poor growth in the first year of life,” the researchers write.

The babies’ mothers completed surveys about their parenting style, their older children, and other factors such as breastfeeding and postpartum depression.

The researchers gave each mother a parenting score based on the survey results.

The babies tended to have higher IQ scores if their parents had more education, had been breastfed for three or more months, and had mothers with high scores on the parenting questionnaire.

Even after adjusting for all those factors, babies’ head growth by age 1 remained tied to IQ scores among the 4- and 8-year-olds.

“Our findings provide additional evidence that infancy is the most important period of postnatal brain growth for determining later intelligence,” the researchers write.