Abbey Monzietti might look like any other eight-month-old infant as she teeters and toddles, working toward her first steps as she calls out for her “mama.” But this little girl is an amazing fighter and she’s already been through a massive, life-threatening surgery. 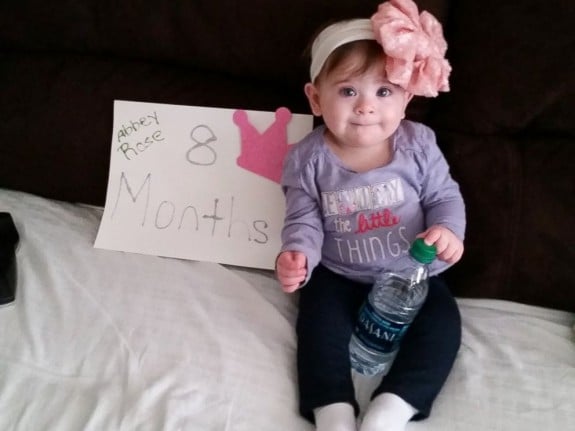 The day she was born, it became immediately clear that something was wrong.

“A visible bump was the size of a golf ball or a little bit smaller. They took her to sonogram maybe that day,” Abbey’s mother, Nicole Monzietti, told ABC News.

But in reality, the tumor was much bigger, and after a series of tests, doctors decided it needed to come out immediately.

“It was pressing on all of her vital organs. Most of it was in her abdomen, a little bigger than a grapefruit,” Nicole said. “Literally my worst nightmare came through. Throughout my whole pregnancy I was so worried. ‘Oh my God, what if something happened?’ I said, ‘I can’t believe this is happening.’ I had to start crying.”

And Nicole’s fears were quite warranted.

On a baby at Abbey’s age, and with a tumor of that size – 1.5 pounds, which is about the same as a 60-pound tumor in an adult – the risks were high. But Abbey would be in even more danger if it didn’t come out.

“The stakes are very high with this surgery,” Dr. Spigland told ABC affiliate WABC-TV in New York. “Hemorrhage or bleeding is the most serious complication. And in a little baby like this, if you develop hemorrhage, it could be life-threatening. Potentially, you could lose the baby on the operating table.”

On the day of the surgery, Nicole sat in the waiting room for seven hours as little Abbey underwent surgery, despite it having been only three days since having a Cesarean.

“I came down with all the things attached to me with socks on,” Nicole said. “Everyone was looking at me like I was crazy . . . I had the nurses come down to bring me pain medicine.”

It wasn’t until her daughter made it safely out of surgery that Nicole said she felt like she could breathe again. And, as it turned out, the tumor was benign . . . but Abbey’s fight wasn’t over just yet.

“They kept her sedated,” Nicole said. “I didn’t see any kind of movement and action from her at all for two weeks.”

Eventually, Abbey woke up and started her road to recovery. She still receives scans to ensure the tumor doesn’t grow back, but otherwise, she’s a happy, active little girl.