As airplane traveling to New York’s JFK airport from Saudi Arabia was forced to make an emergency landing at Heathrow airport after a woman onboard went into labour and gave birth mid-flight!

The Saudia Arabian Airline Flight declared an emergency as the plane was flying over Northern Ireland. The reason for the emergency was not immediately made known, causing fears that something serious had happened onboard.

Thirty minutes later it was revealed  the emergency was an impatient baby who couldn’t wait to arrive!

The captain made the decision to turn the plane around and started traveling towards Wales, before ultimately landing in London.

Abdul Rahman Al Fahad said that the passenger was in her seventh month and had a note from her doctor that allowed her to board the plane.

“Both the mother and the baby girl are doing fine,” Al Fahad told the Saudi daily on Thursday.

The crew was more than overjoyed about the successful arrival of the baby and posed with the newborn and their sibling. 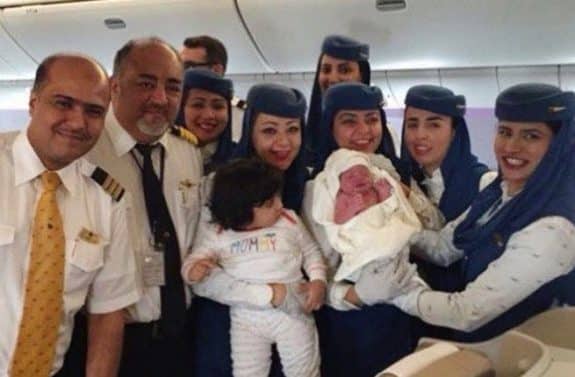