Home » Baby Gets Unique Name After Being Born Mid-Flight

A mom-to-be travelling Singapore to Yangon in Burma has been named her new baby boy in honour of the airline where he was born!

Saw Jet Star was successfully delivered by three doctors who happened to be travelling on the flight.

The Strait Times reports that the passenger started to experience cramping as the plane was beginning to land. As crew members and the doctors were preparing to move her after the plane landed, the baby boy was delivered.

Weighing six pounds, seven ounces, the newborn and his mother were said to be in good health on leaving the plane for a Yangon hospital where they were later discharged. 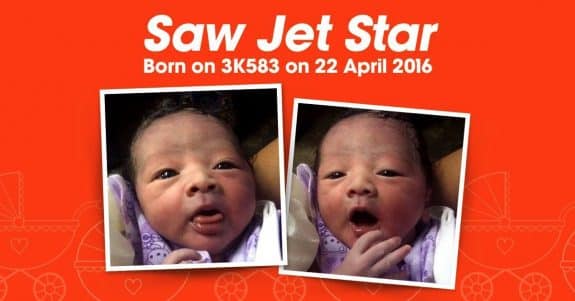 The budget airline said on Facebook it will donate 1,000 Singaporean dollars (£508) worth of baby supplies to the family.

Jetstar’s policy requires a doctor’s letter from pregnant women travelling, 28 weeks into their pregnancy or more, to confirm they are in good health.

A spokesman for Jetstar said: “Our crew are trained to respond to all kinds of events on our aircraft, and we’re proud of the way they assisted with the help of generous doctors onboard to ensure the safe delivery of our youngest ever passenger on a Jetstar Asia flight.”