It was 10 am on December 17th, and patrons at a McDonald’s restaurant in Sarasota, Florida, were eating and casually placing their breakfast orders when the screaming started. 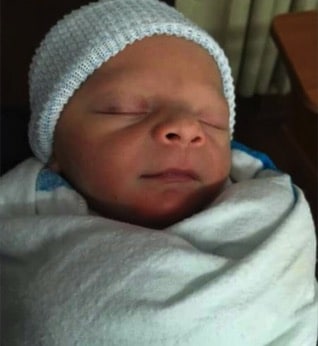 A man came out of the bathroom yelling “she’s pregnant!” and frantically calling for help.

Luckily, nurse April Jones was in the restaurant enjoying her own breakfast and able to immediately respond to the distress call. Inside a bathroom stall, a woman was in full labor.

Jones laid down a couple of jackets and placed the mother on top as she prepared to push.

According to Jones, it was just in time…the woman pushed once and the baby was out.

At first, the infant wasn’t breathing. But paramedics had been called and arrived on the scene. Jones assisted them in clamping off and cutting the umbilical cord. Once the cord was cut, the baby “gulped like a fish and started breathing” and the emergency personnel took over.

The woman and her baby were taken by ambulance to a local hospital with good Samaritan Jones following behind in the car with the newborn’s father Shawn Jordan.

Shawn and wife Cathy’s baby boy was given a clean bill of health after his surprise arrival a full month earlier than expected. Little Parker Jordan weighed 5 lbs. 9 oz.

His mom says that when the time came “everything I needed to do just came to me” – with a little help from some new friends.