Home » Baby Born at The Side Of The Road into Mom’s Pants!

It was panic, adventure and happiness all in one during one baby boy’s birth. Leaving the comfort of a home or a hospital this newborn decided to arrive in a car, right into his mom’s pants! 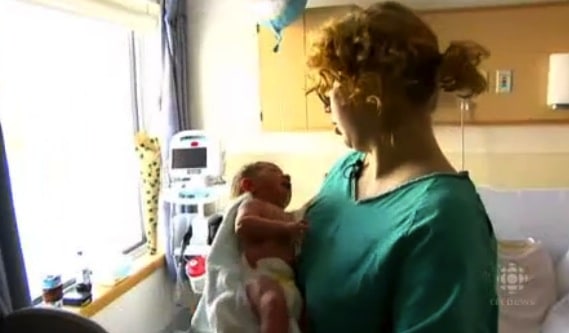 24 year old Aimee Renard was visiting her father in the western Manitoba town of Hamiota when early Sunday morning, she felt her contractions start.

Aimee was not due until the 26th or 27 December so did not panic initially as her dad called the Hamiota health centre, a few blocks from his home.

Oddly, the health centre asked Aimee to go to Brandon, an hour’s drive away instead of coming to the centre. Though her father said the water had broken, the nurse at the other end was sure Aimee would make the hour long trip.

Aimee with her fiancé Jay Goleski immediately set out for the hospital in their pickup truck, but 40 minutes into the journey, Aimee knew the baby wasn’t going to wait.

“I just started taking deep breaths and as time went on, it was like, OK, the baby’s head is there. So like I have to push. And [Jay’s] like, ‘no don’t.’ I told him to stop the truck. And as he was stopping the truck, I pushed out the baby.”

The baby did not have any trouble coming into the world, but he landed right inside one of the leg of the sweatpants his mom was wearing! Aimee could hear a faint cry from inside.

When Jay pulled over the truck to help Aimee he rushed to pull the newborn out of the pant and untangle the umbilical cord around his neck.

“It was kind of terrifying,” Aimee said. “But it was pretty exciting, I guess. I just pulled down my pants a little bit. And took him out. And the cord was wrapped around his neck. So Jay unwrapped the cord from his neck.”

Jay called 911 and within minutes ambulance arrived to take mother and baby to the hospital. 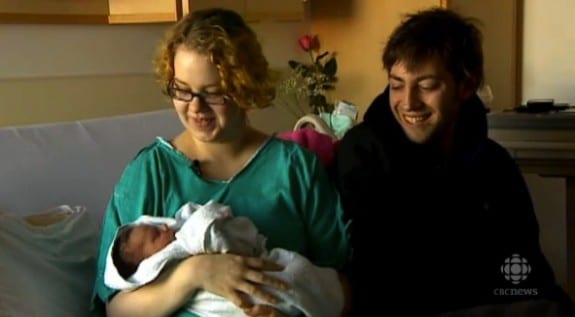 Baby Jaxyn and Aimee are both doing fine but she plans to file a complaint against the Hamiota health centre.

“It was not the right thing,” she said. “They should have at least assessed me and then called an ambulance or something, instead of just telling me to go to Brandon after my water broke.”

Meanwhile, authorities at the centre admit that the system failed.

Pat Cockburn, senior adviser for acute care and nursing with Prairie Mountain Health agrees that the nurse who spoke to Aimee did not make the right decision.

“We definitely prefer [patients] to go by ambulance,” she said. “I am sorry. It was just the clinical decision that was made. It was not the best decision.”

She added that they have spoken to Aimee and the incident is under review. She also said that few mothers have given birth in Haimota when there was no time for them to go to Brandon.

“Hamiota is not a facility that provided obstetrical services, so certainly the experience and the expertise of whichever nurse that might be on at the time can vary greatly,” Cockburn said.

Cockburn said that disciplinary action against the nurse is not being considered but the centre will be careful in future when such a situation arises.