Home » Baby Born From An Embryo Deep-Frozen For 13 Years

A Spanish women has given birth to a baby from an embryo that has been frozen for 13 years. < 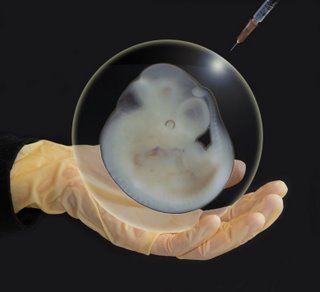 The child was born from one of six surplus embryos deep frozen after a successful in vitro fertilisation programme involving another couple. They donated the embryo through an “embryo adoption” scheme to the unnamed woman, who has now given birth.

The baby, born in Barcelona, is believed to be the world’s oldest in vitro child. The previous record was held by twins born to an Israeli woman who gave birth in May 2003 from embryos frozen for 12 years.

Nobody knows how long an embryo can be stored without losing viability, but the evidence suggests that it could be decades, or possibly centuries. It could, therefore, be possible, though it would be open to ethical questions, for the infertile daughter of the woman who provided the embryo to give birth to her brother or sister.

News of the birth is expected to give fresh ammunition to researchers in countries such as Britain who claim that huge numbers of embryos are being destroyed needlessly every year because Britain lacks the equivalent of the embryo adoption scheme in Spain.

The identity of the new parents and the sex, name and date of birth of the child have not been revealed. Staff at Instituto Marquès, the Barcelona fertility clinic involved, are expected to offer more information next week. They believe that 13 years is the longest storage period from which a healthy baby has been delivered, and medical literature gives them some backing. It remains possible that embryos have been used after even longer, although no account has been reported, and the Spanish team seems to be on safe ground in claiming a record.

It stored the surplus embryos at minus 196C (-320F) — the normal practice — after the biological mother became pregnant following fertility treatment at the clinic in 1993.

The mother is 40 and is thought to have suffered miscarriages before turning to the embryo adoption programme. A source at the clinic said: “The couple both suffer from fertility problems. She had ovulatory problems which prevented her from becoming a mother without help and he suffers from a low sperm count.

“They underwent three courses of fertility treatment, including IVF, but all ended in miscarriages. The decision to turn to the embryo adoption programme was a last resort. The child born from the frozen embryo is perfectly healthy. It goes without saying that everyone is delighted.”

Some countries, including Britain, put a five-year limit on the preservation of cryopreserved embryos. In Britain the deadline can be extended for five years only with the written permission of the parents. Some researchers have criticised the law, saying that the embryos could be used for further attempts to conceive or be donated to other women with fertility problems, as in this case. Spain puts no legal limit on the amount of time that embryos can be stored, although guidelines allow IVF clinics to donate them to other couples or use them for medical research once the biological mother is a certain age.