The family of a baby who was born in a Halifax grocery store has been gifted by the Atlantic Superstore with a years’ worth of diapers for their newborn son Ezra. 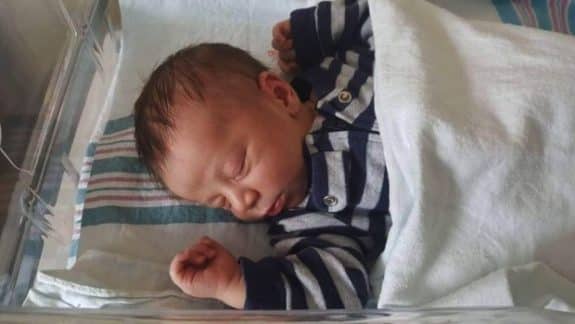 Not only was the birth location unconventional – mom Ashleigh Miller-Cross delivered Ezra in a store washroom – but the circumstances were surprising as well. Miller-Cross says that she didn’t know that she was pregnant.

She told reporters “I really had no idea.”

Ashleigh gave birth to daughter Mia 10 months ago. She says that while she hadn’t yet lost the “baby weight” from Mia’s birth, she hadn’t put on any extra pounds and was the same size. She also had no cravings or other normal pregnancy symptoms.

Store manager Malcolm Comeau was working in his office on Friday when he heard a woman screaming in the washroom. He rushed to open the door and discovered Ashleigh, with her baby already halfway out. Thinking on his feet he dialed 911 and jumped in to help, assisted by a female employee who had also responded to the cries.

Comeau says that “Some other instinct takes over. You don’t think about anything else; you just do whatever you can and get help.”

When the baby was delivered and breathing normally, Cormeau ran to a medical clinic located within the store to get a doctor. Shortly thereafter paramedics arrived on-scene to check out the baby and mother.

Ashleigh and husband Kyle Cross returned to the store on Monday with their daughter Mia and the new baby in tow to thank everyone who helped during the delivery and to express their gratitude for the welcome diaper donation.

The new mom says that she especially wanted to “Thank Malcolm and the lady who helped me in the bathroom straight away.”

For a store that prides itself on customer service, this goes above and beyond expectations!