When Southwest Flight 556 arrived in Charleston on Sunday afternoon it was met by a medical team ready to transport one tiny guest to a near by hospital. 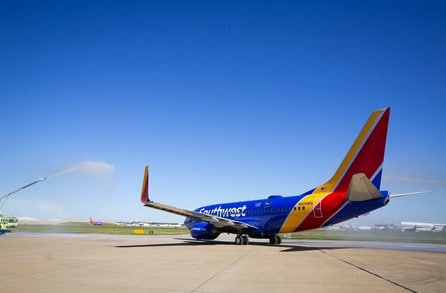 The plane, which was headed to Orlando, was diverted after a mom-to-be on board went into labour and gave birth 90 minutes into the flight.

Southwest spokeswoman Melissa Ford said in a statement to Today in the Sky, “Medical personnel onboard assisted with the delivery.  Emergency medical technicians met the flight upon landing and transported the parents and baby to an area hospital.”

Passengers stayed on board as medical personal assisted the mom and baby off the plane.   Seventy minutes later, the plane was back in the air and en-route to the sunshine state.

One passenger on the flight tweeted from onboard, sharing a short, six-second video in which a baby could be heard crying at the front of the plane.

My @SouthwestAir flight from PHL to MCO was diverted to Charleston because a woman went into labor. Flight crew did a great job. pic.twitter.com/63yVrkWWRL