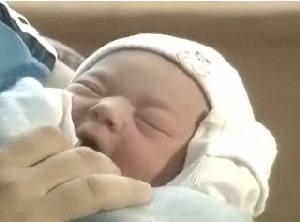 It was a ‘fast delivery’ every McDonald’s fan will remember which was not accomplished by the chain but a mother whose baby was just too eager to arrive into the world.

When Melisa Grapensteter woke up at midnight with contractions 10 minutes apart, she woke her husband Steve and they began the head to the hospital.

Even though Steve drove quickly, the baby had already decided where he wanted to be born. Just as they were nearing a McDonalds on Route 31 in Spencerport, Melisa cried.

“I said Steve – his head’s out and he didn’t believe me until he cried,” says Melisa. “And then I pushed again and he was completely out.”

Thinking quickly Steve, “whipped the car in (the lot) dialing the phone with one hand and driving the car with the other. I don’t remember going from the road to McDonalds.”

He decided to park at the popular chain because it would be the easiest way for the ambulance to find them. When emergency crews arrived they checked that newborn Logan Michael Grapensteter, a healthy 7 pounds 5 ounce baby was breathing normally and transported mom and baby to the hospital.


Says Melisa who is also mom to Blake, 5, and Aiden, 4,” It was awesome, his color -just the fact that he was crying.”

Although the adventurous night has come to an end for the Grapensteters, the jokes that Logan’s unusual birth is creating fail to cease.

Says Steve, “We’ve got people from my work who said ‘do you want fries with that?’”