Karen Morrisroe-Clutton is a 32 year old mother. Back at the end of July she contracted the nasty E. Coli bug when her baby boy was only ten weeks old. 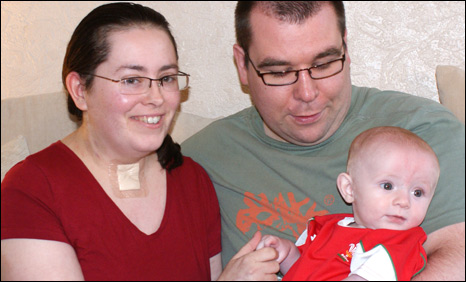 She was placed into an induced coma for five long weeks. During this time her husband Paul played tapes for her with the sound of their babies voice.

I did know that I was dying at one point. In fact because I was having all this treatment I knew it wasn’t working; at least something wasn’t working quite well.

I gave up. I wanted to die. But I heard Ollie.

I heard his voice because Paul was playing the tapes and I turned around and said I can’t do this. I need to live. I heard him and thankfully I pulled through.

Karen is now home after spending 67 days in hospital. She has almost made a full recovery since this whole entire nightmare began. She was desperately ill, suffered through seizures, kidney failure and then, of course, the coma.

For eight weeks while she lay fighting for her life in ICU she was not able to see her son Oliver because of risk of infection. However she did see him in lots of pictures and videos. Once out of ICU she was able to be reunited with her little bundle of joy.

He did remember me… sort of gave me a look and then this massive smile came… it was just wonderful.

She added that her consultant, Stuart Robertson, had been desperate to get her back with her baby to speed up her recovery.

He hoped it would help… it did… I had something to live for.

I absolutely LOVE reading stories like this. So amazing how things happen!!Shannon Strohm, Staff Writer (Mommy to Ashton, born at 24 weeks weighing 1lb 9oz on June 10th 2005. Now 4 years old with many special needs but an absolute awesome happy child! Also mommy to an angel, ^Hunter^ who was born on March 28th 2009 at only 18 weeks 4 days.)