Wang Xiaojie, a 4 year old from China’s Guangdong Province was just four months old when she was diagnosed with Beta-thalassemias. Stuck with regular blood transfusion, every two to three weeks, her parents desperately looked for other options to save their baby girl. Finally, the answer was the couple’s newborn who helped save their daughter’s life.

Guangdong has the highest incidence of thalassemia in China with 3,000 people suffering from the illness. According to medical data one in every nine people in Guangdong Province carries the thalassemia gene. 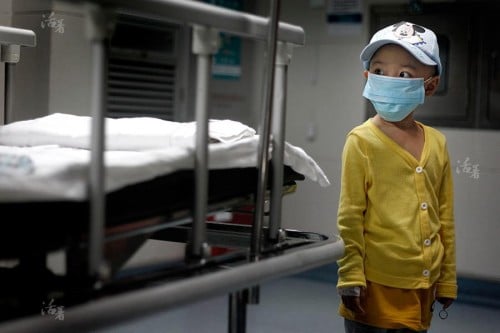 When Xiaojie was four months old she was diagnosed to have beta thalassemia major. It is a genetic condition that occurs when both parents are carriers, and the child born may receive the genes from both parents and suffer the lifelong illness.

Children with beta thalassemia need lifelong blood transfusions sometimes almost every week. In China this may cost up to 100,000 yuan every year and more than 90 percent of the patient cannot afford the cost.

Xiaojie was given blood transfusion every 2-3 weeks and an injection every 8-10 hours 20 times a month.

For her father Wang Xiaochun and her mother Luo Lihua it was heartbreaking to see their child suffer.

The couple researched various cases and files and discovered that apart from the regular blood transfusion, the only viable option was bone marrow transplant that could save their daughter.

They began looking for a suitable donor through China’s marrow donor program (CMDO) but after two years of trying there was still no match for Xiaojie.

The turning point in their lives came when Lihua found out that she was pregnant. While it was an unplanned pregnancy, doctors said there was 25 percent chance that the baby’s bone marrow might match their daughter’s.

On the newborn’s arrival a fetal cord blood test showed that the stem cells matched.

Xiaojie was hospitalised on May 10th to wage her final battle against a condition she had been living with all her four years of life. With media attention, many people came forward to donate for the medical procedures and they were able to raise nearly 300,000 yuan($40,000 U.S.) for her transplant surgery.

Over the next few weeks, the little girl went through preoperative chemotherapy, transplant surgery, post-surgery observation, and recovery.

The road to recovery is still tough.

Over the next six months to a year, Xiaojie has to live in aseptic isolation at home, and undergo regular blood tests to monitor her weak immune system.

But good news is her first post surgery observation shows that the white blood cells are growing normally and she might never need a blood transfusion.