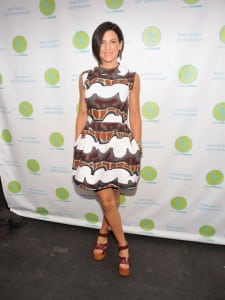 Baby Buggy®, a non-profit organization dedicated to providing families in need with essential equipment, clothing, products, and educational tools and services for their children, held its annual Baby Buggy Bedtime Bash, Wednesday, June 1st at Victorian Gardens at Wollman Rink in Central Park. The event, which was attended by more than 1000 parents and children, raised more than $385,000 for Baby Buggy, which is celebrating its 10th anniversary this year.

Jessica Seinfeld, Founder and President of the Board, attended the event with Baby Buggy’s Board members and Friends along with supporters Erica Hill, Kyle MacLachlan, Rosie Pope, Cynthia Rowley, Jeremy Sisto, Tiffani Thiessen and Ali Wentworth all of whom were accompanied by their children. The event also celebrated the debut of Baby Buggy’s new Fatherhood Initiative, a program aimed at helping fathers of at-risk children, and many fathers from one of Baby Buggy’s grantee sites, the Bronx Fatherhood Program, attended the Bash with their families as VIP Guests.

The Baby Buggy Fatherhood Initiative has initially partnered with three New York based programs: the Bronx Fatherhood Program, Fathers First Initiative in Queens, and The Fatherhood Program at Forestdale in the Bronx. The programs help non-custodial fathers to embrace fatherhood and the accompanying responsibilities by addressing issues such as relationship building, positive parenting and discipline strategies, improving the relationship with their child’s mother, and helping a father establish his role within the family.

“After ten years of working closely with our city’s mothers and children in need, we could clearly see the impact that a fatherhood initiative would have in at-risk families,” said Baby Buggy Founder Jessica Seinfeld. “Every study shows that a child with a father present is more likely to succeed in every aspect of his or her life, and yet many dads who want to play a more supportive role in the lives of their kids for a variety of reasons cannot. With the support of our sponsors and generous Baby Buggy dads, we are committed to helping community-based programs that overcome the obstacles to fathers who can, should, and want to be there for their kids.”

As part of the Initiative, Baby Buggy provides the fathers enrolled in the programs with donations of clothing and goods to keep their children safe and also helps coordinate financial literacy workshops for them, teaching them strategies for budgeting, debt reduction and saving, as well as encouraging them to set up savings accounts for the children. To thank the dads for committing to these important fathering programs, Baby Buggy invites the participants to events such as the Bedtime Bash and provides the dads with small gifts upon “graduation” from their programs.