Yasmin and Michael Burley would give anything for just one sleepless night with a crying baby. But it’s very unlikely that will ever happen for them because their son, Tate, was born with Miller-Dieker Lissencephaly syndrome, a brain disorder so rare that its prevalence is unknown. 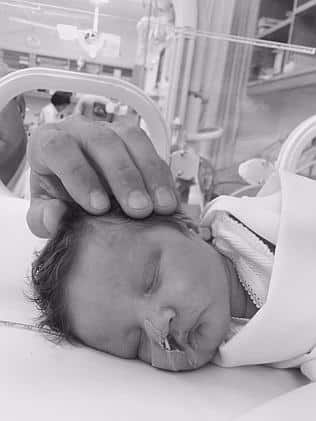 “We just want him to cry,” Yasmin told Daily Telegraph. “We want the sleepless nights and all the things a parent goes through.”

Born at 35 weeks gestation, Tate weighed only 1.7kg. He wasn’t breathing, and he wasn’t crying. Doctors assessed him and discovered the rare brain disorder that affects most of his major organs.

The condition means his brain is smooth, like an egg, instead of being covered in the cauliflower-like folds and creases found in most brains. And because of that, his little body doesn’t function like it should.

He’ll never cry. He’ll never be able to suck from a bottle. No one knows how long he’ll live, but it’s very unlikely he’ll live through his childhood, and even if he did, his brain will never develop past that of a three-month-old infant.

“He has no muscle tone and doesn’t have a lifespan past childhood,” Tate’s mother, Yasmin, told Daily Telegraph. “We are not thinking too far ahead because no one really knows what the journey for Tate is . . . I’ve been in touch with a lot of families in the US, and no one has gotten past the age of five.”

Needless to say, it’s been a very difficult and heartbreaking journey for the Burley family thus far. But one of the hardest things they’ve had to do is explain Tate’s condition to their older sons, Zane, 13, and Kye, 7.

“It’s tough, especially for the boys. They don’t understand it,” Yasmin said. “Their baby brother is sick and they question around ‘Will he die?’ was really hard to deal with. For my seven-year-old to ask me why God wasn’t looking after him was heartbreaking and he keeps asking why mum is always crying.”

Yet they’re still holding on. They’re even trying to raise money for the Brain and Mind Research Institute (BMRI) to help fund future research into the condition that might help other families devastated by the disorder.

“Tate is a humble reminder of the truly important things in life,” Yasmin said. “We just wanted to be a family.”