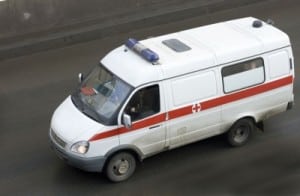 An unnamed couple had a surprise delivery along icy roads in Houston, Texas. When winter weather conditions made the roads dangerous to drive on, the couple had to give birth in their car along the highway.

The couple were on their way to the hospital, when the icy roads caused them to slide and crash their car. Stuck against a guardrail ramp, the parents-to-be were trapped with the baby coming at any minute. Thankfully, dad was able to call 911 and get an emergency crew to the car just in time.

“His wife was in labor at the time and he was taking her into Ben Taub,” said Firefighter/EMT Ryan Machacek, who was driving the ambulance.

The ambulance arrived just in time to load the couple up, but within minutes of getting on board the baby was on his way. At about 5 A.M., the baby was born on the icy roads of Houston.

No names have been released yet on the family, but reports say that mom, dad, and baby are fine at the Ben Taub General Hospital in Houston. – Summer, staff writer