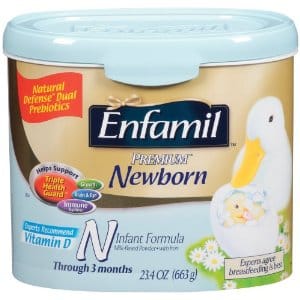 Mead Johnson Nutrition Co. said today the formula that was pulled from the shelves after two babies tested positive this month for the environmental bacteria Cronobacter, has been found safe with no presence of bacteria.

The formula maker conducted tests on samples of its Enfamil baby formula tied to a U.S. Food and Drug Administration investigation found no presence of bacteria. The company called the product safe.

Three large retailers removed a batch of the formula from store shelves last week after ten day old baby Avery Cornett died from contracting the rare bacteria Cronobacter sakazakii which can come from powdered infant formula contaminated with the bacteria.

A Mead Johnson spokesman said the batch that was pulled probably wouldn’t be made available for sale again until the FDA makes a final determination based on its testing.

Mr. Perille said yesterday that the company holds samples of every batch it sends to retailers. The company’s negative test for Cronobacter confirmed results the company got before it shipped the batch of Enfamil Premium Newborn powdered formula, he said.

On Friday Dr. Robert Tauxe, deputy director of the CDC’s division of foodborne, waterborne and environmental diseases said baby Avery also consumed other types of baby formula before his death, so the link to Enfamil was still unproven.

He declined to name the other formulas that could be involved, and whether they were also powdered, or liquid.

“At this point, no formula samples have yielded Cronobacter,” said Dr. Robert Tauxe.

Another baby, in Illinois, was also sickened from Cronobacter infection earlier this month, but later recovered. That infant also consumed a number of products and investigators are still looking into what caused the illness. It is unknown whether the baby also used Enfamil formula, and investigators are analyzing the DNA from both infection strains to see if they are similar.

If you are currently bottle feeding your baby formula or plan to, PLEASE check out the World Health Organization’s website for more information on safe preparation of infant formula.

Powdered infant formula (PIF) has been associated with serious illness and death in infants due to infections with Enterobacter sakazakii. During production, PIF can become contaminated with harmful bacteria, such as Enterobacter sakazakii and Salmonella enterica. This is because, using current manufacturing technology, it is not feasible to produce sterile PIF. During the preparation of PIF, inappropriate handling practices can exacerbate the problem.

In the downloadable PDF they recommend that parents who will be formula feeding chose sterile liquid infant formula, especially for those who are at the highest risk of infection.