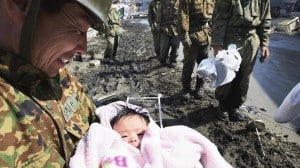 For the last 4 days the media reports surrounding Japan’s earthquake and tsunami have been grim, with thousands of deaths reported.

Yesterday there was a bright spot when a four-month-old girl, that had been swept from her parents’ arms when the deadly wave crashed into the family home, was found by rescuers.

As soldiers from the Japanese Defence Force went door to door pulling bodies from the devastated homes they heard a cry, but dismissed it as a mistake.

It wasn’t until they pulled away wood and slate, dug back the thick mud that they realized there was a little miracle waiting to be rescued.

Immediately, they picked her up, wrapped her in a blanket and cradled her, not believing that someone so young had survived when all hope had been lost.

The baby was cold and wet and crying, but she is believed to have suffered no other injuries. Why she did not drown is still a mystery.

Thankfully, the soldiers were able to trace her father, who had been taking refuge in his wrecked home with the rest of his family, and return the baby to him.