The search for survivors continues, following the 7.2 magnitude earthquake that struck the Turkish province of Van on Sunday.  The impoverished and war-torn area, near the Iranian border, has been thrown into chaos.  The clock is now ticking on efforts to find and reach victims still trapped in the rubble of collapsed buildings. 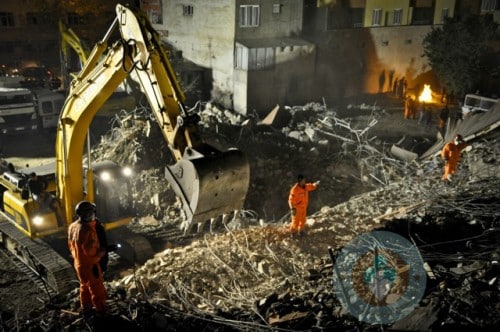 But, amidst the tragedy, a tiny miracle; a two-week-old baby girl was rescued from a collapsed apartment building on Tuesday.  She had survived for two days, cradled in her mother’s arms. 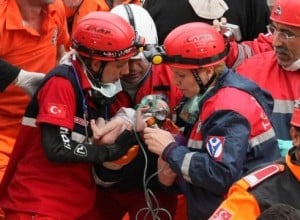 Her mother, Semiha, also survived.  She was pulled from the rubble, by rescuers, after several more hours of work.  She had been trapped next to the sofa.

“I am so excited.  What can I say?  Let God help them,” the baby’s grandmother, Sevim Yigit, said, in a Reuters report.

The baby’s other grandmother was also, reportedly, alive in the collapsed apartment.  There was no news about the little girl’s father, who was also at home, in the apartment, at the time of the quake.

“We have been waiting for almost 48 hours,” said a male cousin.  His mother is among the missing.  “I hope my mother and aunt will be rescued as well.”

The condition of the building, from which the family was retrieved, makes this story truly amazing.  Their apartment was one of many in a multi-story building.  One half of the building is now little more than broken concrete and twisted metal.  The other side of the building is leaning dangerously.  It has been shored up with the support of cranes, to make it safer for the rescue effort.

This sort of, unrecognizable wreckage, is the common condition in the area after the quake.  The death toll is at 366 and climbing.  Thousands upon thousands more have been displaced.

The Turkish Red Crescent is preparing to shelter 40,000 homeless people.  But, without an accurate assessment of the number of people displaced by the quake, it is difficult to anticipate the scope of the need.

Officials said 12,000 more tents would arrive in Van, Tuesday.  The central government is being criticised for their slow response to the crisis.

Emin Kayram, 53, spent last night sleeping in a van, with seven other family members.  They were lucky.  Many more were outside, exposed to the elements, unable to take shelter indoors for fear of structural instability.

“Life has become hell,” Kayran says.  “We are outside, the weather is cold.  There are no tents.”

Turkey has declined foreign offers of aid, stating that it is not necessary at this time.

“I extend my thanks to those presidents who called by phone sharing our sorrow, stating solidarity and offering assistance,” said President Abdullah Gül, in a written statement Sunday.

Deputy Prime Minister Bülent Arinç reiterated the president’s sentiments explaining, “We have thanked them for their offer.  Around 50 countries made similar offers.  If we would accept all of them, it would turn into a great mess.” – Jen R, Staff Writer