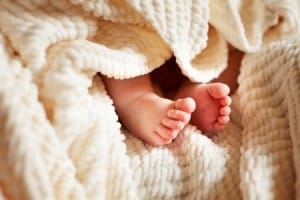 A mom is reliving the horror of a car crash but calling it a miracle nonetheless because her four month old baby daughter survived despite being underwater for four horrifying minutes.

On September 17th, 21 year old Beckie Thompson was driving her daughter Imogen to the nursery when swerving to avoid another vehicle in Spalding, she lost control of the car. It rolled over into the dyke and landed on its roof.

Beckie is a trainee nurse and had been driving only for six weeks. The impact pushed her into the rear of the back seat. She somehow managed to come out and began searching for Imogen.

The baby girl was still strapped to her car seat and Beckie noticed her toes poking out of the water. She immediately pulled the baby out of water and placed her on the bank.

Imgoen’s lips and face had turned blue. Beckie realised she was not breathing and began screaming for help. That is when a motorist stopped by to help.

He immediately covered the baby girl in his T-shirt and began performing CPR. Three long minutes passed before the baby was breathing again.

‘It is a miracle that she is alive. For all intents and purposes she was dead for seven minutes, four in the car, then three at the roadside. It was like an out-of-body experience, like I was watching a soap or something. She had blue lips and blue fingertips. I really didn’t think she was going to wake up.’

She also recalls how the good Samaritan himself was shaken trying to resuscitate the baby.

‘That poor man was shaking and crying as he tried to resuscitate her. He kept going until she started to make a noise. He kept on going until she was fully screaming. I can’t thank him enough – I owe my little girls’ life to him.’

The mother adds even doctors are puzzled how a little baby survived this ordeal and being underwater for that long.

‘The doctors don’t really know how she managed to survive, let alone escape without any brain damage. Maybe it’s because she is a bit of a chubbier baby, but it is still a total mystery.’

Imogen was airlifted to the Queen’s Medical Centre, in Nottingham, after the accident. She had water in her lungs and stomach which had to be pumped out. After four days in the hospital she is now healthy and back home.

Beckie too was treated for cuts to her face and a minor puncture injury where her car keys pierced her elbow.

A spokeswoman from the East Midlands Ambulance Service said, ‘We got called to a report of a car upside down and that police were on route. Paramedics were also advised that the car had gone into a dyke and the baby wasn’t breathing. When we arrived CPR had already been commenced by a bystander.’

Experts believe the baby might have survived because cold water slows the metabolism down.

Dr Tim Ubhi, a Consultant Paediatrician from Airedale NHS Trust, said: ‘If a young child is submerged in cold water then a number of reflexes come into play which result in a slowing down of the child’s metabolism thus reducing the need for oxygen. In addition, during drowning the muscles around the throat may act to prevent the inhalation of water into the lungs.’

‘Together these reflexes make resuscitation more likely to be successful by limiting damage to vital organs including the brain. With effective resuscitation there is a possibility that an infant submerged in cold water could survive and not suffer significant brain damage.’

Beckie says she could not find the name of the stranger who saved her daughter’s life, but she would like to find him and thank him personally.