Home » Baby Girl with Half a Heart Saved by Pioneering Surgery 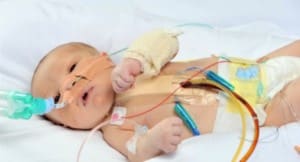 Niamh Taylor was born with a condition that affects one in 15 million babies. With only half a heart and a rare genetic condition, the baby girl’s life was saved by doctors at the Birmingham Children’s Hospital.

Niamh was born to Laura Phillips and Jake Taylor with a Hypoplastic Left Heart also known as half a heart when the left side of the heart does not develop properly. She was also diagnosed with a genetic condition called Mosaic Turners Syndrome which causes short stature, swelling of the hands and feet and coarctation of the aorta. The chances of being born with both the problems were one in 15 billion.

Liamh’s condition was detected during the 20 week ultrasound.  At that time doctors warned Laura that she might miscarry her pregnancy.

“When we were first told about the heart problem, it was absolutely devastating,” recalled Laura.Then we were told about the Turner’s Syndrome which is a chromosome abnormality that only affect girls. It seemed like bad news after bad news and I cried for a whole weekend. Niamh wasn’t expected to survive but I could already feel her moving and we knew we wanted to give her every chance we could.”

Even when Laura delivered, the chances of her baby girl surviving were put to 50-50. She was immediately rushed to the Birmingham hospital known for its heart surgery facilities.

“Normal families go out and buy prams, toys and clothes for their babies.But we didn’t dare do that. It seemed like tempting fate.Then, two weeks before she was born, we went out and bought a couple of babygro’s so that she had something to wear.”

‘‘It was such an anxious time. Most families are happy and excited when a new baby’s due but we were worried about the problems she might have and we didn’t know what she’d look like when she arrived,” Jake adds.

“But it went far better than we expected though. Niamh breathed well as soon as she was born and she looked gorgeous, with beautiful big eyes.”

At six days old, Niamh underwent a breakthrough surgery at the hospital known as the modified Sano operation.

The procedure has been pioneered at the hospital and involves a Gomex Tube replacing the pulmonary artery. It then allows the right hand side of the heart to pump blood to the lungs.

Experts say that about 18 years ago this kind of procedure was not possible and a baby with half a heart would have been very difficult to save. But Niamh was lucky.

‘‘She had her operation at six days old. The chest is usually left open for a couple of days to let the swelling go down, but they were able to close her up after just one day as there was so little swelling. And she was only on a ventilator for two days,” said Jake.

Niamh came out of the intensive care sooner than expected. She also recovered quickly from the heart ward and will be able to go home to her parents this week. Though, her operation was a success she might need another one in the next few months and a heart transplant in her teen years to ease the extra pressure her right hand side of the heart is facing.

The thankful parents are now part of the hospital’s Children’s Heart Appeal, called Please Don’t Stop, which is looking to raise the final £500,000 of a £2 million target.

Laura says, “‘The hospital staff have been brilliant. We were amazed at how much they were able to do and the way they’ve saved Niamh’s life. They’re all so kind and supportive and seem to understand just what we’re going through – and when we need a hug.’’

The £2 million will be used to build a state-of-the-art ‘hybrid’ cardiac operating theatre where multiple procedures can take place at the same time on critical cases like that of Liamh’s. The intensive care unit too will be expanded to treat over 500 more critically ill youngsters each year.

“There’s growing pressure on the intensive care beds,” explained Fiona Reynolds, Paediatric Intensive Care Consultant.“The child population in general is rising, particularly in the West Midlands. And more and more children with increasingly complex diseases are surviving and living longer because of medical breakthroughs and innovative surgery, much of it pioneered here at Birmingham Children’s Hospital.

‘‘Expanding the number of beds means we can keep more children alive and treat more diseases. Some of the diseases we can now treat successfully would have been certain killers just a few years ago.’’

Speaking about Niamh and her incredible recovery Fiona says that the hospital only treated four other baby girls with the same combination of problems as hers and only two survived making Niamh very lucky.

Niamh was also born with an extra thumb, but the doctors are confident that could be removed easily.

‘‘Turner’s Syndrome usually leads to the little girls being shorter than normal and they often tend to have puffy hands and feet and heart problems. Strangely, lots of children are born with extra digits and these are usually taken off under local anaesthetic, so this won’t be a problem for her,”said Fiona.

Niamh has a good luck teddy with a guardian angel around her neck. Her parents hope that other children too get as lucky as her.

“They’ve given our family hope that Niamh can get better and lead a normal life,” added Jake. ‘‘We’d say to everyone: Please Don’t Stop – keep on giving to the appeal.”