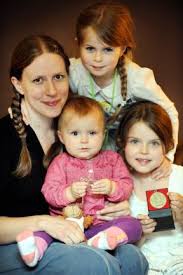 When baby Eliza was two month old, she was diagnosed with an eye cancer that could leave her completely blind. For her parents the only hope to save her eyesight came from a pioneering new treatment with their daughter being only the second person in the UK to receive it.

Today baby Eliza is 13 months old and has been undergoing treatment for the past 3 months to save her eyes from bilateral retinoblastoma (Rb) or eye cancer. Her parents Lucy and Jamie Deakin found she was suffering from the condition when she was two months old.

When treatment began on the infant, Eliza’s left eye responded well to the traditional treatment but for her right eye a new treatment was advised by doctors. This involved injecting the chemotherapy drug behind her iris.

Eliza underwent weekly session of the intravitreal chemotherapy from November last year and will have her eighth, and final, treatment this week. She will then have regular check-ups.

“They think she’s responding really well. Her left eye has completely stabilised since the last treatment on it in December and with her right eye, they think everything is progressing really well,” said 31 year old mom Lucy who is a nurse.

“She might grow another tumour, so they will keep checking her until she is five or six, but the gaps between check-ups will get longer as she gets older,” Lucy said. “Just before Christmas they said they thought it was starting to work, but kind of tentatively.”

“We’re definitely a bit more relaxed,” Lucy said. “It was really nice to hear that it might be working. we’re starting to feel more positive. It’s been nearly a year since she was diagnosed. It’s been a pretty full-on year and this is the first time in both eyes that it’s been pretty stable. It looks like we’re past the first biggest hurdle. We’re really pleased.”

The baby girl has no sight in her left eye, but good sight in her right eye, despite a damaged retina. If the family had opted for alternative treatments like radiotherapy, because of the way her cancer had developed, that might have led to the risk of further cancer developing or the removal of an eye.

Consultant ophthalmologist Ashwin Reddy who is overseeing her treatment said that he was pleased with the results but would still wait for the next few months to see how she was fairing.

“I am happy to say that there has been no deterioration and there is a slight improvement,” said Mr Reddy.