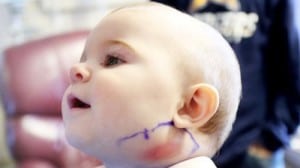 Baby Mya was admitted to Hutchinson Regional Medical Center earlier this week because of severe swelling in her neck. At first, doctors thought the 7-month-old girl had a swollen lymph node from a staph infection, but hours after a doctor popped a pimple in the center of the swollen area, the truth emerged. Or, more accurately, the quill of a black feather emerged.

Doctors believe that Mya had either swallowed or inhaled the feather that, slowly but surely, made its way through her neck. Shortly after the feather emerged, another doctor pulled it from little Mya’s neck. Now the bright-eyed baby girl is famous.

“Channel 12 and 3 are on their way to do interviews,” Aaron Whittington, Mya’s father, told hutchnews.com. “Another national news network called my boss to get my number. I think it’s pretty crazy. It’s cool people are talking about it and see how crazy it is…It’s fine with us.”

And talking they are! Mya’s story has been featured on national and international news stations- from CNN to news outlets in Kenya and India. Even programs like RightThisMinute have contacted the parents for more information about the little girl who somehow ingested a feather.

Thankfully, while the story could have ended in some sad, tragic twist, it seems that little Mya and her parents are going to get a happy ending. Mya has been permitted to go home and doctors say she is doing very well.

“They actually said she was good enough last night to send home,” Aaron said. “We saw a specialist today to cut (the swollen area on her neck) open and drain it, but he said it was sealed nicely and he didn’t want to open it to try to fix it.”