First-time mom, Katherine Oyedoh, had done everything right before heading out for her 12 hour international flight. Three weeks before her due date, she talked to her doctor and received medical clearance to fly. But, as we’ve learned many-a-time before, babies will come when and where they want. Katherine’s baby, little Ebosalume, decided that 36,000 feet suited him just fine. 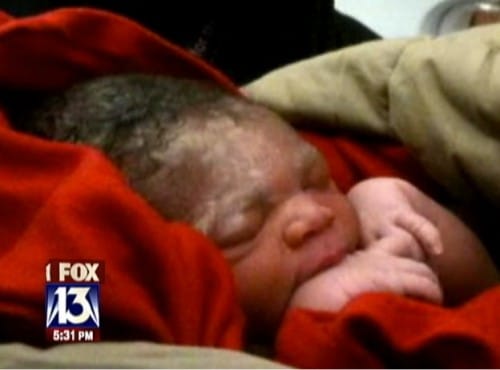 It was 3:20 in the morning when a passenger asked one of the flight attendants, Susan Carnes, to come to row 37. There was a female passenger yelling. As soon as the passenger was within Susan’s sight, she knew something was seriously wrong.

“I saw her and just the way she was leaned over and moaning, I just knew,” Susan said. “I said, do you feel like your water has broken and she said ‘Yes,’ and that’s when I knew, okay we’re having a baby.”

Susan had dealt with plenty of emergencies in her 30 years of working as a flight attendant, but never a live birth. Understanding her inexperience and knowing that she needed help (and having seen similar incidents in movies), Susan yelled out “Is there a doctor on board?”

The cry for help was answered by Dr. Patrick Ojukwu, an OB/GYN from Stockbridge, Georgia. Immediately, he stepped in and took over and Susan became his “nurse.”

Keeping true to her position, Susan made a call to the cockpit and told the pilot and other attendants that they were about to deliver a baby. Susan also directed the other flight attendants, having them fetch supplies they would need: gloves, hot towels, paper towels and a bottle of vodka. Susan found a pair of scissors in her galley gear bag, but they were still a few items short.

“We couldn’t find any twine or string or anything, and this passenger across the aisle offered his shoe strings,” Susan said.

The shoestrings and the scissors were then sterilized in the vodka and everyone prepared for the delivery. Even other passengers jumped in to help. One passenger timed the contractions on his watch. Two attendants with medical experience monitored Katherine’s blood pressure. Before they knew it, the baby was emerging.

“The doctor said, ‘here comes the baby.’ Baby comes out and the doctor hands him to me…And I was like OH MY GOD!” The doctor told Susan to tie the cord and “So I got the shoestring and tied it and tied it again. And snip, snip, snip, three little snips is all it took.” 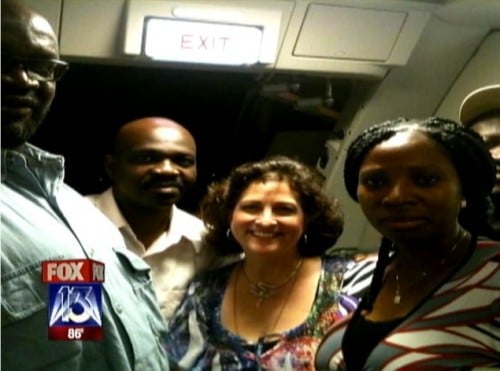 Little Ebosalume was now ready to be with his mother so, just before wrapping him, Susan reached over to place him on his mother’s chest.

“I took the baby to hand it over and I lifted him across the seats. And as I did, I noticed everyone was looking at me, and I just raised it up and said “it’s a boy!” and the whole airplane broke out into applause and laughter.”

Just fifteen minutes later, their flight landed at a diverted destination, in Dakar, Sengal, so that mother and baby could be taken to the hospital.

Ebosalume’s dad, Grag, is back home in California and hasn’t seen his son yet because the plane’s course was altered. There were also some citizenship issues at first, but they have all been cleared up. Katherine and Ebosalume are set to fly back on Thursday and dad says he is very excited to meet his son.

Susan also hopes to meet up with Katherine and the little boy she helped delivered while they make their trek home. She says she feels like a part of the family now.

“It was very special and I hope I’m going to go to the first birthday,” said Susan.