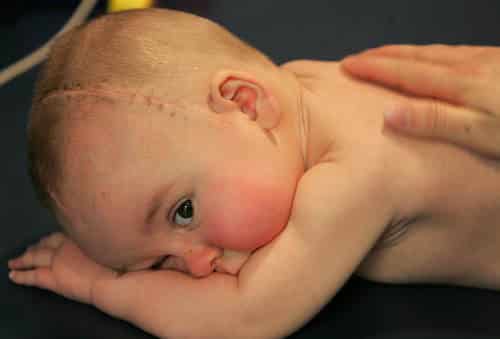 Jaxon Fuller, a ten-month-old from Akron Ohio, is recovering from surgery in which doctors removed most of the left side of his brain.

The surgery, which is called a hemispherectomy, took five hours. Dr. William Bingaman, vice chairman of the Neurological Institute at the Cleveland Clinic, performed the surgery.

Prior to the surgery, Jaxon was having up to 15 seizures a day. He had his first seizure the day he was born. At first, his epilepsy could be controlled with medications but by the time he was 5-months-old, the medications were no longer working.

The left side of Jaxon’s brain was not developing normally and, as a result, the right side of his body was weaker than the left. He used his right hand very little and often kept it balled in a fist.

“The bottom line is you have to tell the parents, ‘Gosh, we don’t know why this happened,’” Dr. Bingaman said. “This is a hyperactive brain and it sits there and misfires. That’s why the epilepsy is associated with it.” 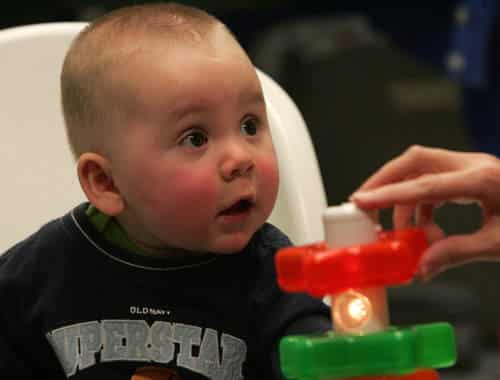 Jaxon is expected to recover well. He is currently visiting Akron Children’s Hospital for three hours a day, five days a week, to receive occupational, physical and speech therapy. The therapy is designed to help strengthen the right side of his body and encourage Jaxon to use his right hand. He is even making inroads with speech.

It is expected that the right side of Jaxon’s brain will compensate for much of the removed tissue. “In young children, fortunately, their brain has plasticity,” Bingaman said. “The right side will pick up many things, but it won’t pick up the ability to have fine motor movement skills of his right hand. He’ll walk with a little bit of a limp. He will have peripheral vision loss on the right side.”

Since the surgery, Jaxon has been seizure free. When he has gone five years without a seizure, he will be considered cured. His parents and doctors have high hopes that this will be the case and that Jaxon will go on to lead as normal a life as possible. “I can’t believe how well he’s doing for so short a time,” said his mother, Nicole Fuller. ”Every day, it seems like he does something more.” – Jen R, Staff Writer