At least 33 were killed after the explosion leveled an apartment block in the Russian city of Magnitogorsk. As emergency crews worked to save the residents of the building they were shocked to find a baby boy still alive. a suspected gas explosion. 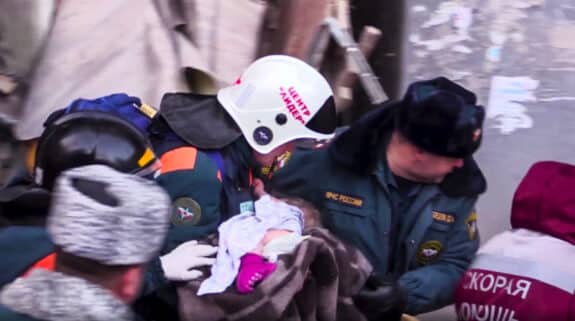 The infant was found after one of the rescue workers heard a baby crying, a statement from the ministry revealed. He endured 35 hours in the elements.

During their first pass over the site, rescue dogs did not detect the baby boy. But as workers continued to dig he was discovered.

The boy’s mother is alive and has come to the hospital.

While five people have been pulled alive from the collapsed block, 36 residents are still missing. Hundreds of emergency workers continue to sift through the rubble in hopes of finding more survivors.

The baby remains in serious but stable condition at a children’s hospital in Moscow.