Home » Baby Slips Through Toilet Chute During Delivery and Survives 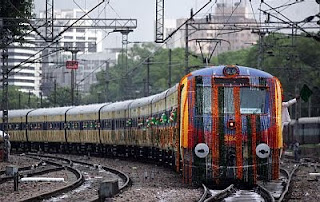 Tuesday night 28 year old Rinku Devi and her husband Bhola Rai were aboard 8181 Tata Chappra Express heading to the home of her parents. They were expecting their little bundle in about four weeks.

Feeling some pain in her abdomen she had got up from her seat and headed to the washroom on the train. To her shock and horror she gave birth into the toilet. Things happened so quickly that before she could grab the baby, he slipped through the pan of the toilet and fell onto the tracks.

Immediately she ran from the washroom and jumped from the moving train. People aboard thought she was commiting suicide and pulled the emergency alarm. By the time the train came to a stop it had gone about 2km.

We got off the train and started looking for my wife. After an hour, we found Rinku sitting beside the track with the baby in her lap,” said husband Bhola Ray (33), a businessman from Rourkela.

Swapan Sarkar, the medical superintendent of the Purulia Sadar Hospital, said both mother and baby were doing fine.

Wow, I can’t even imagine giving birth into a toilet on a train and watch in horror as the baby falls down to the moving tracks below. And then to jump from a moving train without any second thought. I am so happy that mom and baby are doing well. Incredible! – Shannon Strohm, Staff Writer