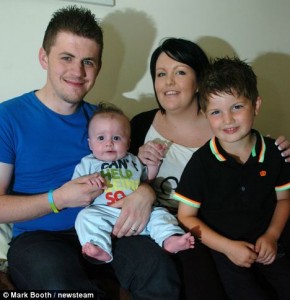 Parents of three month old Riley thought they had been blessed with a healthy baby boy until last week when they discovered that little Riley was in fact suffering from a condition that is the complete opposite of Diabetes.

Riley Crump has a condition called congenital hyper insulinism in which his pancreas secretes more insulin than required by the body. This is opposite to diabetes where the pancreas secretes less insulin increasing the sugar level. The disorder is so rare that it  effects only 1 in 50,000 babies.

Zowie Crump, Riley’s mother first noticed the symptoms when she was looking after the baby. He was happy and hearty when suddenly he started getting blue and flopping. She says,

“He was as happy as could be and smiling his head off but then he had hiccups and then I noticed that there was no chest movement. He was going blue, the twitching was more severe, his eyes were rolling and he was flopping.I phoned the ambulance straight away. It was frightening.’

When she and her husband Ben rushed to the hospital they were told that the child had sugar level of just 1.1 when normally that should be more than 4.

Tests later showed that the infant was suffering from the rare disease that caused the pancreas to secrete more insulin and lower the sugar level of the body.

The family, who also have another son five year old Harvey Jones, are now hoping to go to Great Ormond Street Hospital for Children in London where more tests will be done and hopefully the reason for his condition will be known as they are still unsure about the kind of treatment and medications Riley will need to lead a normal life.

For now the brave little boy’s condition is stable and according to his dad Ben, he remains oblivious to the problems surrounding him, smiling through all the medications and 64 heel pricks to diagnose his condition.  – Atula, Staff Writer