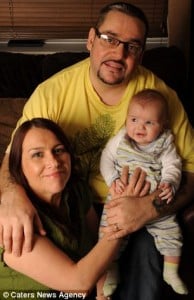 A baby has beat the odds and survived a killer bug at 21 weeks and a heart operation while inside the womb.


Just before her 20th week of pregnancy Deanna Allen was exposed to the common childhood illness called Parvovirus or Slapped Cheek, a virus that causes the child’s cheeks turn bright red. Other symptoms are the build up of fluid in the body and fevers.

Not realizing that the virus could be passed onto her unborn baby, the mom-to-be was given the grave news during in a routine scan in May that showed the baby’s body was horribly swollen.

The virus had caused severe anaemia, or Massive Hydrops which destroys the bodies red blood cells, meaning Freddie was producing fluid around his head and stomach.

Scared of the diagnosis and the negative advice they received from their midwife, the family sought out a second opinion. They met with Dr Stephen Burrel at Spire Hospital, who told them their unborn baby was suffering from parvovirus and suggested they go to Kings College, London where he could receive a blood transfusion, from world renowned Professor Kypros Nikolaides.

‘I said that my younger son had suffered with slapped cheek about ten days before, and he immediately said I had parvovirus and that this was causing the baby to have severe anaemia which was causing the massive hydrops.

‘Freddie was my third child and I knew I should stay away from people who smoke, not to drink and those sorts of things, but I had no idea that this small infection could kill my baby, I think there needs to be a lot more awareness about it.’

During the blood transfusion, Freddie’s swelling was decreasing and it looked as though Freddie was going to make a full recovery. However, well into the procedure Freddie heart ruptured under pressure caused by the transfusion.

While the medical team scrambled to fix Freddie’s heart; the baby was without oxygen for almost a minute. The Surgeons successfully fix the hole in his heart and Freddie was born without further complication.

“going though the blood transfusion was very scary. I wasn’t under any anesthetic so I could see everything that was going on. At one point the baby’s heart actually hemorrhaged, so they literally had to do surgery on a baby’s heart inside of me.”

‘Thank you isn’t enough, you say thank you to someone who opens a door for you, there are not words for how grateful we are to Dr Burrell and Professor Nikolaides.’