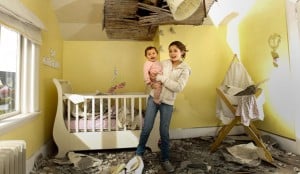 The 7.1 earthquake that rocked New Zealand last week caused an untold amount of damage to homes and buildings. One little baby, however, survived the earthquake despite her room collapsing in. She is being hailed a “miracle survivor” in Canterbury.

Pearl Adriaens, 9 months old, may have been one of the few who knew what was going on ahead of time. Shortly after midnight, the baby woke in her crib crying for her parents. Rather than keeping her there, mother Lucia Adriaens decided to take little Pearl with her back to her own bed to sleep. In four hours the earthquake would hit, and Pearl’s crib would be covered in pieces that fell from the ceiling.

But Pearl was safe in her parents’ bed at the time.

“Her whole room was smashed in. If she had been in bed I don’t think we would have had a baby to be honest,” Lucia said.

“We thought we were going to die because, by God, did this house swing. It felt like a train going through. All the furniture in all the rooms was just thrown.”

The family, who also has 3 older daughters lived in a 100-year-old Fendalton home that was once a restaurant. They are now living with neighbors as they wait to hear how well the house stood up to the earthquake. Already, several parts of the home have been removed due to danger of toppling over. That family’s manufacturing business downtown was hit even harder and is scheduled to be demolished.

However, thanks to Pearl’s midnight wake-up call, the family still has their youngest daughter.

“Everyone thinks I should be having a breakdown over this, but I’m not,” she said. “I actually feel fine. I just feel so lucky that nobody has been hurt and that I’ve still got my baby. Somebody was looking after us.

The earthquake in New Zealand caused damage in the billions, however only two people were reported injured during the quake. Had it not been for a chance parenting choice, little Pearl could have been the fatality. – Summer, staff writer.