An Arkansas family is counting their blessings today after their baby was found alive after being thrown from their vehicle during an accident.

At 7 p.m. on Friday night, an 18-wheeler reportedly clipped the family’s car as they were travelling down the I-30, causing a crash. There were five people in the vehicle, but the 8-month-old baby was ejected from the vehicle and thrown 35 feet into the median on the highway.

But as luck would have it, she landed inside a storm drain and was completely unharmed when the Texarkana, Ark., Fire department found her. 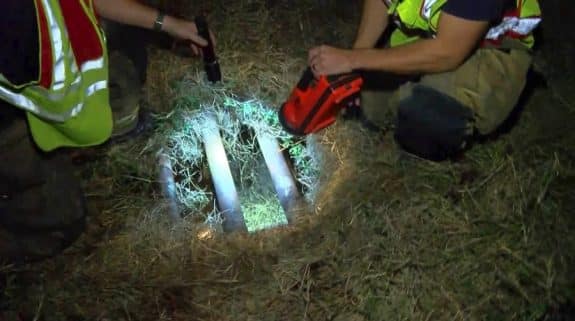 When they removed a layer of hay from a drainage grate, they made the amazing discovery.

“The baby at the time – the 8-month-old – was actually sitting down in the grate, sitting up and looking up at us waiting for us to pull her out. She wasn’t screaming, she wasn’t crying, was just sitting there waiting for us.”

Texarkana, Ark., fire Capt. Charlie Smith added, “We reached down there and she more or less had her hands up for somebody to pick her up. It took 3 of us to work her around the grate and get her back up through.”

When they evaluated her, EMTs found little more than a scratch on her forehead.

“There had to be some kind of divine intervention for her to end up being okay the way she was,” Moore said.

“To be ejected from that all the way down this hill,” Smith said

“Yeah, a good 25 feet away from this grate right here and end up being okay is just simply amazing,” Moore continued. “Up until we heard her, I was just worried about it being more of a recovery rather than a rescue. But once we heard her, it was just a sigh of relief.”

“So many times, we go out and things aren’t okay,” an emotional Smith said. “And just during the holidays here to have a positive just feels good.”

All four people who were traveling in the car with the baby were taken to the hospital for evaluation.  Everyone except the driver was released. 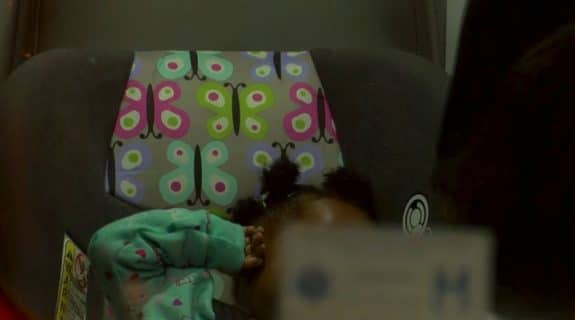 The driver of an 18-wheeler has been cited for an improper and unsafe lane change.