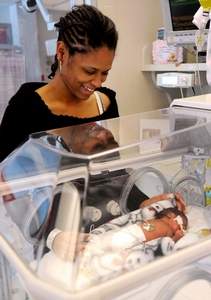 It’s not everyday that someone looking for a new car gets a baby instead, but that is exactly what happened to Anitra and Michael King who welcomed their newborn in a car dealership parking lot.

The couple, with Anitra six months pregnant and driving their Honda Accord, were planning to get a new car from the Crawford County dealership, Kightlinger Auto Sales on Dec. 30. Halfway through the trip, Anitra had gone into labor timing her contractions with the dashboard clock. To make the situation worse, they had gotten lost following directions that had been downloaded online.

Meanwhile, Jennifer Zelasco, an office manager at Kightlinger, was waiting for the Kings who had a 9.30 a.m. appointment and were already an hour late. When the car finally pulled over in the parking lot of the dealership and strangely no one came out of it, Jennifer felt something was wrong but could never imagine that soon she would be assisting the Kings in delivering their child.

Anitra’s contractions were six minutes apart when Michael came out to ask for help. Jennifer and other employees immediately rushed to the car, with Anitra still in the driver’s seat. Time was short and as they called 911 for help, someone had already reclined Anitra’s seat who started delivering the baby.

Moments later Minitra Charmaine King arrived weighing just 2 pounds, 8 ounces and was 14 inches long. When the ambulance crew arrived they cut the umbilical cord, checked the baby and then transferred the pair to the hospital.

The tough new-mom was up the very next day to finally get her paperwork done for the new car and drive it to their Cleveland home. Now shuttling between Erie and their home to take care of her other two children, Asia and 18-year-old Umar Clark Jr., all Anitra could say about the day is,

“We’re just so fortunate, so many things can go wrong when you have a baby so early, and outside a hospital. God was looking out for us.”