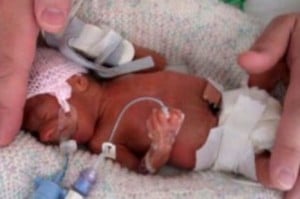 For Sarah Bradbury, it all feels unreal even now when she is holding her little baby boy in her arms. That is because she not only endured eight miscarriages before him, she also had to see baby Joseph struggle for life born premature at 23 weeks and five days.

Sarah and her husband Scott had spent last 10 years of their lives planning a family and hoping that the next pregnancy would bring good news to them. But unfortunately eight of the pregnancies turned to miscarriages. Doctors said it was due to her weak cervix.

In March last year Sarah became pregnant again. She had undergone a procedure called a cervical cerclage, in which the cervix is sewn closed during pregnancy and therefore hoped that they would get lucky this time.

But a stitch became infected that resulted in her going into labor at just 23 weeks and 5 days. The legal cut-off time for an abortion is 24 weeks.

After an eight hour long labor, little Joseph was born on August 28th weighing 600g (1lb 6oz). The Bradburys prepared themselves for more heartbreaks as doctors gave the preterm baby only 10 percent chances of survival.

But the newborn was not ready to give up that easily. Baby Joseph spent the next seven months in hospital. During that time he was on lifesupport, he underwent eight blood transfusions and needed an operation to fix his heart valve at six weeks of age.

‘Joseph fought against the odds and won. We are so delighted he is in the world. He is a complete miracle,’ said Sarah.

The couple finally brought him home.

‘It still feels like a dream and I keep thinking I will wake up and somebody will tell me that it isn’t true,’ said the first-time mother who is a nursing assistant. ‘We had lost so many babies, we were just glad that Joseph was alive,”

Adds the proud father, “We never gave up trying. Even though Joseph was early and all the stress we went through, we are so glad he is here with us now.’

Baby Joseph is surely as persistent a fighter as his parents. Here’s wishing him a happy and healthy future. – Atula, Staff Writer