Home » Bagged Spinach May Be Linked To E.Coli Breakout 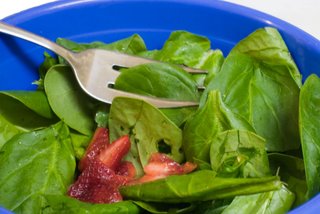 An outbreak of E.coli bacteria that may linked to bagged fresh spinach has killed one person and sickened dozens of others in eight states, the U.S. Food and Drug Administration said yesterday.

“The FDA is advising consumers not eat bagged fresh spinach at this time and that any individuals who believe they may have experienced symptoms of illness associated with E. coli 0157 contact their health care provider,” Dr. David Acheson, head of the FDA’s Center for Food Safety and Applied Nutrition, said in a teleconference with reporters.

Acheson said investigators do not have a link to a specific area of the country where the spinach might have been grown or to a particular brand or company.

E. coli O157:H7 is a potentially deadly bacteria that causes bloody diarrhea and dehydration. Children, the elderly and people with weak immune systems are at the highest risk.

The states that have reported illnesses include Connecticut, Idaho, Indiana, Michigan, New Mexico, Utah and Wisconsin.