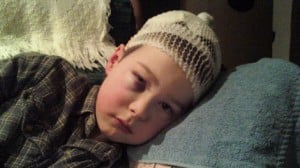 A seven-year-old boy is lucky to be alive today after he was pinned and attacked by a Cougar while outside playing with his sister.

“I saw this animal on top of my son with his mouth at his head… I knew if I went back and took time to call for help it would be too late,” said Mary Metzler, recalling the scene she met when her son was attacked by a cougar on New Year’s Eve.

Mary had left her two-year-old in a play area at the church while the older children played outside on a small hill. She was searching for cleaning supplies in the stockroom when she heard the horrible screams.
Metzler came running and frightened the animal off by hitting it with a cleaning rag.

“I just took it and hit him in the face,” she said.

“It’s a mother’s instinct: ‘Don’t mess with my kids,’” said David Metzler Sr., in praise of his wife’s swift reaction to the terrifying situation.

The brave mom gathered her three shaken children and drove 30 kilometres to the nearest hospital in Burns Lake where young David was treated for wounds to his head. He is recovering well and has returned to school.
Trackers have since ascertained that there were, in fact, two cougars present in the church yard where the boy was attacked. They were both female and both in excess of 30 kilograms. They were tracked, located and destroyed.

Sergeant Gary Van Spengen, a senior conservation officer, said “Cougar attacks are rare, but they do happen from time to time,”

This encounter is, in fact, one of two that has occurred in B.C. in recent days. The other happened 200 kilometres northeast of Vancouver. The eleven-year-old boy in that attack was protected from injury by his dog, Angel. – Jen R, staff writer