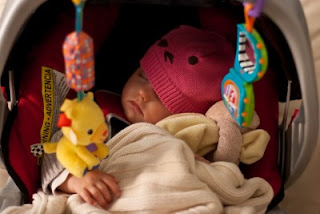 A tragedy in British Columbia has reinforced why parents shouldn’t let they babies sleep in their car seats for extended periods.

A 10-month-old baby boy died at his home Sunday after he stopped breathing while sleeping in a car seat.

The baby was being looked after by his aunt and uncle when the couple realized that they didn’t have any more cribs for him to sleep in. They have three children of their own, two sons (7 and 3 months) and a daughter, 1.

At that point they called his mom to come pick him up, but she was unavailable. She phoned later on that night and said she left more diapers outside the door and that she would see them in the morning.

After having a had a hard time calming him down, they let him sleep in his infant car seat.

Austin Point, the uncle, said that everyone finally went to sleep, but when they woke the baby wasn’t breathing. A study we posted a few years ago found that the upright sleeping position puts infants at risk of obstructing their airways, which could endanger their lives.

They looked at nine infants who suffered ‘life threatening events’ while strapped into a car seat where they were left asleep outside the car.

The children were described as “blue”, “scrunched up” and “not breathing”.

Reconstruction of the events using the baby’s own car seat found their heads were bent forward with the jaw pressed down on the chest, which narrowed the airway and caused breathing problems.

Paediatrician Professor Alistair Gunn, who did the study with colleagues at the Auckland Cot Monitoring Service, said car safety seats were essential to protect children from injury or death in an accident.

But they were not meant to be used as a substitute for a cot or bed when the children were not being transported around, he said.