When I was pregnant the best part, after feeling my little guy kick, was seeing him on the monitor.  With my first son I had a lot of ultrasounds because I had quite a few complications and the baby needed to be monitored.  But with my second, I only had one, which left me wishing I could re-live my screen time with him.

BebeVu is a cool service that is offered to parents-to-be during their routine ultrasound.  While the technician is checking the baby, they record the session for you to watch or share later.  Once your regularly scheduled ultrasound is completed they post the video online so you can share your baby’s first pictures and feature film with family and friends on Facebook, Twitter, and the BeBeVu YouTube Channel. 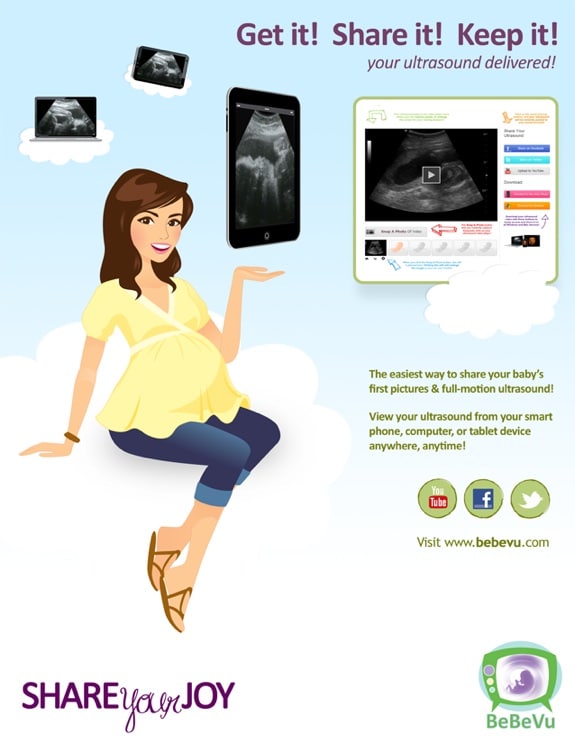 What I like is that this is not an additional ultrasound, but just a video of the one you are already having done.

Because they didn’t do routine ultrasounds in the 80’s when my brother was born, my dad had never seen a growing baby in utero.  He was pretty excited, however, when he and my mom happened to be with me during one of my checks and got to have a peek at the baby at the end. My son must have known because he sucked his thumb for us, which was so sweet to watch.

Having a service that allows you to share your sonogram would be nice for to-be grandparents and aunts and uncles to be part of your pregnancy and see your growing baby – especially if there is more than one!

Plus, at the end of the day this is an awesome keepsake for when your child gets older.  You can show them how tiny they were when they were growing and it won’t cost hundreds of dollars to have the memory because BeBeVu is only $29.99.

Currently BebeVu is available in ObGyn and hospitals offices throughout the United States.  Canadian moms don’t stress, there are plans in the near future for them to start offering this service in clinics and hospitals here too.

Thanks to Rachel @CelebBabyTrends for tipping us off about this cool service!