Home » Being Born Too Early: Number One Cause Of Infant Death

Reuters is reporting this morning that the number one cause of death for infants in 2002 was being born prematurely. 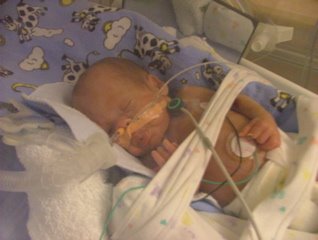 A reclassification of infant deaths by the Centers for Disease Control and Prevention concluded that 34 percent of infant deaths in America in 2002 should be blamed on premature births, said a study by CDC researchers in the journal Pediatrics, published by the American Academy of Pediatrics.

Previously, the National Center for Health Statistics reported 17 percent of infant deaths were directly caused by premature birth or low birth weight, with the leading cause listed as birth defects.

Several other listed causes of infant death, such as respiratory distress from underdeveloped lungs, should have been ascribed to premature birth, the study said.

Overall, two-thirds of the nearly 28,000 infant deaths in 2002 were babies born prematurely — or before 37 weeks gestation and many much earlier.

The United States ranks 23rd among industrialized nations in infant mortality and has a growing rate of premature births, which defy an easy explanation.

A report released in July by the Institute of Medicine said premature births, which accounted for one-in-eight U.S. births last year and have increased 30 percent since 1981, cost society at least $26 billion a year.

Assisted fertility methods are used more often and there are a larger number of older mothers, both of which tend to produce multiple births and such babies are more likely to be born early.

The U.S. infant mortality rate declined sharply throughout most of the 20th century but has been relatively stable in recent years — coincident with the rise in preterm births.

The earliest preterm births — newborns weighing less than 750 grams (about 1.6 pounds) with a gestational age of less than 28 weeks, who face particular health risks — contributed to a rise in the 2002 U.S. infant mortality rate, the CDC study said.

I would like to believe that science has evolved enough to save more and more babies when they arrive early. I posted an article a couple months ago that found infants who are born severely premature(22-24 weeks gestation) have a better chance of survival now than in the 90’s.

There are more twins, triplets and quads being born now due to fertility which means that prematurity is more common. When our son was in the hospital our pod had 3 sets of twins in it at one time. The NICU had about 8 sets in total when he was first born. Just as we were being transported to a “level 2” hospital, 2 sets of triplets came in…. all born before 30 weeks.