As parents, we know that the display of special characters on food items only means the item is more expensive than the other brand; the stuff in the box is usually the same. Our children do NOT know that; all they see is their favorite television character.

We’re about to find out!

Michelle Obama announced on Wednesday that the nonprofit organization behind the children’s educational program, “Sesame Street,” will let the produce industry use the beloved furry characters – Elmo, Big Bird, Bert, Ernie, and all the others – to market fruits and vegetables to children. 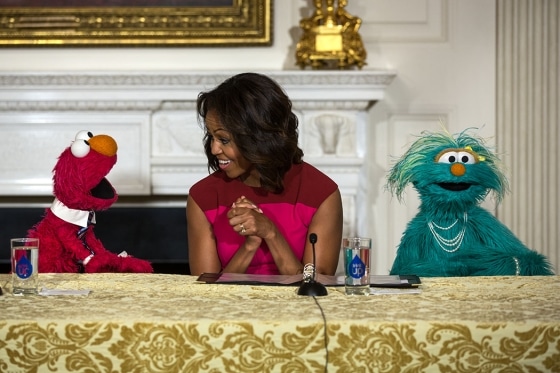 Free of charge – something that the First Lady is definitely excited about!

But she’s not the only one. Larry Soler, president and chief executive of the Partnership for a Healthier America, told Associated Press that kids under the age of 5 don’t eat enough fruits and vegetables. As they get older, the problem gets worse.

The hope is that, by placing the furry Muppets on produce items as stickers or in the produce aisles on stand-alone signs, our children will actually start asking for more fruits and vegetables. This hope is based on evidence from a study published last fall in the Archives of Pediatrics and Adolescent Medicine – a study which the First Lady cited during her announcement.

For the study, Cornell University researchers gave more than 200 boys and girls between the ages of 8 and 11 the choice between a cookie, and apple or both. Most kids opted for the cookie, but once the researchers put an Elmo sticker on the apple, nearly double the children opted for the apple.

“Just imagine what will happen when we take our kids to the grocery store, and they see Elmo and Rosita and the other Sesame Street Muppets they love up and down the produce aisle,” Mrs. Obama said during her announcement at the White House. “Imagine what it will be like to have our kids begging us to buy them fruits and vegetables instead of cookies, candy and chips.”

The licensing agreement between the Sesame Workshop and the Produce Marketing Association will last for two years. It is the latest step by the private sector to support “Let’s Move,” the First Lady’s almost 4-year-campaign to fight against childhood obesity in the United States. And Sam Kass, the “Let’s Move” executive director, says it’s a big one.

“For them to step in and do this is a really big thing,” Kass, who is also an assistant White House chef told Associated Press.

Sherrie Westin, the executive vice president and chief marketing officer of Sesame Workshop, told Associated Press that it isn’t normal for the nonprofit to waive its fees, especially since it is one of the places where the company pulls in the most revenue. But Westin says, despite the fact that no one really knows just how much potential money could be lost in the deal, it’s something that gives the company another way to use the characters to pitch healthier eating to families and children.

“It would be a shame not to use them to that end,” Westin said of the Muppets.

This is the first announcement since a summit on food marketing to children in which Ms. Obama urged several companies to do more, faster, to promote healthier foods with less fat, salt and sugar to children. This agreement sounds like exactly what Mrs. Obama (and parents) was hoping for, especially since we could start seeing the fuzzy Muppets in our produce aisle as early as this spring.