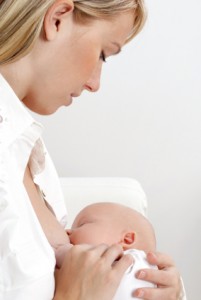 Baby’s gut microbes have an important role to play in developing his immune system and a mutli-university research suggests that breast fed babies have a healthier immune system than formula fed babies because of the way the bacteria’s in the gut colonize.

The study, which was conducted by University of Illinois, Texas A&M University, Miami University, and University of Arkansas scientists. has been published in the April 30 issue of BioMed Central’s open access journal Genome Biology.

Mihai Pop of the University of Maryland in a review of the study for the publishing journal said that,

“This study provides a first insight into the interactions between microbes and the developing infant and how these interactions are affected by diet. It also demonstrates the power of new experimental and analytical approaches that enable the simultaneous analysis of the microbiome and the host response.”

For the research the scientists carefully analyzed the genes of the cells of the intestine of three month old babies. The genes were compared of babies exclusively formula fed and those that were exclusively breast fed.

The human intestine is lined by epithelial cells that act as the first guard from food antigens and pathogens. Approximately one-sixth of these cells are shed every day into feces. The scientists compared the baby’s epithelial cell gene with that of the bacteria that are found inside the intestine.

They found that babies that had been breast fed had a wider and more diverse bacterial colonization than those that had been formula fed.

The scientists also found a link between the expression of genes in the bacteria and genes of the immune system in the baby.

“While we found that the microbiome of breast-fed infants is significantly enriched in genes associated with ‘virulence,’ including resistance to antibiotics and toxic compounds, we also found a correlation between bacterial pathogenicity and the expression of host genes associated with immune and defense mechanisms,” said Robert Chapkin of Texas A&M University.

What this means is that while it was always known that breast feeding helps in building a better immune system of the baby, the latest research only proves it to be true and how the process of digestion of mom’s milk actually gives the baby an ability to fight a wider number of pathogens.

“The findings show that human milk feeding promotes the beneficial microbe population in the gut and crosstalk between these bacteria and the immune system of the infant and are helping us to define exactly why breast is best,” said U of I scientist Sharon Donovan.

For healthier babies and healthier adults, breast feeding is still is the best option.