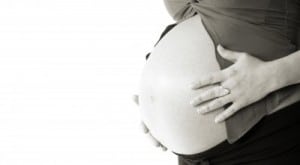 About 1 in 8 U.S. women will develop invasive breast cancer over the course of her lifetime. As researchers work to determine what causes more than 230,000 new cases every year, they get new clues everyday.

In a study published online at PLoS One, researchers found that women who give birth to bigger babies are prone to developing breast cancer later in life. The risk remains even after the researchers considered other factors such as mother’s weight and other breast cancer risks such as family history.

The surprising findings revealed that moms who give birth to a baby born weighing 8.25 pounds or more, it increases the risk of breast cancer by 2.5 times over other women who give birth to newborns of lesser birth weight.

“Women who had big babies have hormonal environments in pregnancy favoring the development of breast cancer,” says researcher Radek Bukowski, MD. He is professor of obstetrics and gynecology in the Division of Maternal-Fetal Medicine at University of Texas Medical Branch in Galveston.

Moms of bigger babies have a high levels of estrogen and insulin-like growth factors and a low level of anti-estrogen or breast-cancer-protective hormones.

The team reviewed two studies for the current research. In one they found that among 410 women 31 developed breast cancer after 17 years of follow-up. These women were more likely to have larger babies during birth. In the other study they reviewed the hormone level of a woman during pregnancy.

Bukowski however says that the relation between birth weight, mother’s blood hormone level and risk of breast cancer are a preliminary result the team has arrived at and further studies need to be done.

Stephanie Bernik, chief of surgical oncology at Lenox Hill Hospital in New York City says that the research results should be interpreted with caution.

She says that the birthweight of a baby is not something that can be determined prior to delivery and an overweight mother may have a tiny baby or a average weight mother may give birth to a heavy baby.

“This is not a modifiable risk factor, but it may be something to think about when you are thinking about your breast cancer risk,” she says.

She adds that if the research is confirmed with further studies then in the future it may be added as another risk factor that may help detect which women are more prone to having breast cancer in the future.

Her advice to women is to discuss with their doctors some factors that can reduce the risks if they had given birth to a large baby.

“This information may also be used to make decisions on how and when you should be screened for breast cancer,” she says.

Ashley S. Roman, MD also agrees that a baby’s birth weight is not something a mom can control, but after the baby is born, precautions can be taken.

“Babies who are born too big may be at greater risk for obesity and diabetes,” she says. “Now we have to think about how this affects the long-term health of the mother.”

“Some of these are modifiable,” Roman says.  “if you are obese,losing weight prior to getting pregnant may help make sure your baby is not born too large, as can avoiding excessive weight gain during pregnancy.”

Getting in shape before getting pregnant is also a good way to reduce overall risk of breast cancer. Some studies have also shown how breastfeeding can lead to lowering of cancer risk.