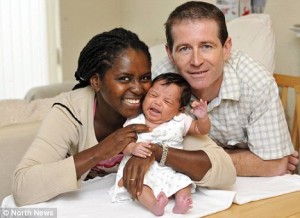 Janet Walker had always wanted to become a mom but in spite of trying many times, she miscarried because of her cervix which was too weak to support a baby. But her dream finally came true when she gave birth to a healthy baby girl, after being fitted with a ‘bionic’ cervix.

41 year old Janet, a lawyer from the UK had been trying for a family with her husband, 42 year old Graham, for seven long years. When she was initially unable to conceive she went for three rounds of IVF treatments. It was later diagnosed that she had Asherman’s syndrome, a disorder where the womb has scarred tissues.

After an operation, Janet was told she would be able to conceive naturally which she did. But unfortunately she lost her boy named Jeremiah in 16 weeks and then another baby in 18 weeks. ‘It was such a traumatic miscarriage, the kind that keeps going through your mind for months afterwards.’ She says.

Later Janet and her husband visited the Lancaster Hospital where they finally diagnosed her problem of weak cervix. Doctors hoped that if a stitch was made at the cervix when she was in the 13 weeks of conception, the baby could be saved. The couples hope began to rise but again the stitch could not save the baby which was born premature at 23 weeks.

Janet then came to know of the operation where doctors tie the top of the cervix with a synthetic material to protect the fetus from falling through Doctor Roy Farquharson of Liverpool Women’s Hospital.

She says, “Although the procedure is common in the US, many doctors in the UK aren’t aware of it. The operation involves cutting the abdomen and lifting up the bladder to reach the cervix. The top of the cervix is tied with synthetic material, called mersilene, to stop the fetus from falling through. A tiny gap remains, so that the cervix can perform its other functions too normally.”

After the operation was performed on Janet she had two miscarriages but was finally able to carry a baby girl till 37 weeks of pregnancy. In June she delivered via caesarean section a healthy baby girl named Ainka meaning ‘cherished one’.

Says Janet, “I just can’t believe it. I wake up in the morning sometimes and think my beautiful baby was a dream, but there she is asleep in her cot. If I hadn’t been fitted with the bionic cervix, I would never have been able to have a child”.

Now she hopes other women with weak cervix can benefit from her story and consult their doctor about the procedure.