A long journey to motherhood ended when 24-year-old Moaza Al Matrooshi gave birth to a son, thanks to surgeons who were able to restore her fertility by implanting ovary tissue taken from her as a child. 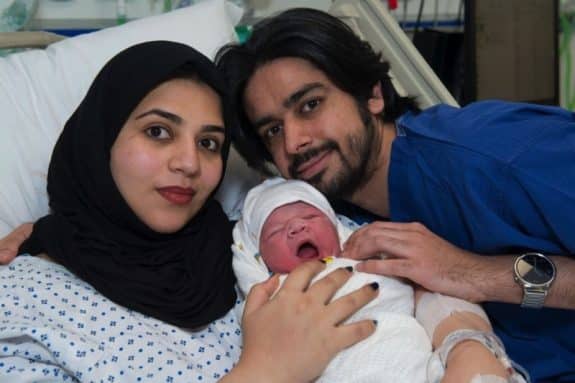 Born with beta thalassaemia– an inherited blood disorder that can be fatal if left untreated – the young woman from Dubai needed chemotherapy (which can damage the ovaries) before receiving a bone marrow transplant from her brother. So doctors at Great Ormond Street Hospital in London operated on the then-9-year-old girl, removing her right ovary and freezing the tissue.

Fast forward to last year, when that preserved tissue was sent to Denmark where the transplant took place.

According to Moaza’s doctor Sara Matthews, a consultant in fertility, after the ovarian tissue was first removed it was mixed with cryo-protective agents and stored under liquid nitrogen.

For the operation, surgeons transplanted five slivers of Moaza’s ovarian tissue back into her body. Four of those slivers were stitched onto her failed left ovary and one onto the side of her uterus. Prior to the surgery, the then-23-year-old had been going through menopause. Following her transplant, her hormone levels began returning to normal. She began ovulating and her fertility was restored.

Dr. Matthews says that “within three months of implanting the ovarian tissue, Moaza began having regular periods again.” The surgery enabled her to return to normal function.

It was then that Moaza and husband Ahmed began IVF treatments that resulted in three embryos, two of which were implanted.

The young mother says “it’s like a miracle.” Her son was delivered at the privately-run Portland Hospital on Wednesday.

Professor Helen Picton carried out the ovary freezing and leads the division of reproduction and early development at the University of Leeds. She says this birth is “incredibly encouraging,” and points out that worldwide more than 60 babies have been born from women who have had their fertility restored. But Moaza is the “first case from a pre-pubertal freezing and the first patient who had treatment for beta thalassaernia.”

This young woman never stopped hoping and says that finally being a mother is “a perfect feeling.”